That's because since 2009 U.S. companies spent more than $2.3 trillion buying back their own shares, according to a report by Aranca Investment Research Services.

All that buying acted as a floor for stocks and launched the major indices to new heights.

But now, after watching stocks fall off the "Wall of Worry" this year, instead of climbing it, investors who simply bought the dip without any strategy are praying new buyback programs will start lifting stocks.

Too bad for them (and too bad for the companies that wasted billions of dollars watching their shares fall back to Earth), all the upcoming share buyback announcements combined can't put Humpty Dumpty back together again.

That's because sentiment about global growth, about the market, and about the long-term value of buybacks has changed.

And let me tell you, when sentiment changes, everything changes...

Why Investors (Used to) Love Buybacks

For the most part, investors love buybacks - and the positive sentiment they create.

That's because in a benign market at least, corporate buying puts a floor under prices. And that engenders positive sentiment.

In a bull market, multibillion-dollar buyback programs push prices higher to attract more buyers and create upward momentum. At a minimum, investors believe if share prices slip after running up, corporate buying will come in at obvious "support" levels and create another safe floor.

Fundamentally, spending cash on or debt-financing buybacks is touted by management as "returning cash to shareholders" by reducing share count, which reduces the number of shares the company's earnings are divided across.

So, by reducing shares through buybacks, earnings per share can rise even if actual earnings are flat or falling. And that's a source of positive sentiment for those holding those stocks.

In a bull market, it doesn't matter much to investors that executives are spending or debt-financing share buybacks instead of reinvesting in the business, acquiring other companies that benefit the corporation, hoarding cash, increasing dividend payments, or paying special dividends, because share prices are rising.

It's only when share prices fall and the market looks vulnerable to a correction do investors actually begin to question where the billions of dollars companies spent have gone.

In other words, as sentiment changes and turns negative (which it certainly has now) and stocks fall, the positives inherent in buying back shares to lift prices and engineer earnings per share metrics higher turn negative as investors consider where that money went and how it could have otherwise better served growing real earnings into the future.

Here's how sentiment has changed...

Expectations May Be Worse Than Reality Now

Expectations for global growth have fallen off a cliff but stocks have only faltered, and that's worrisome to investors.

According to Yardini Research Inc., since 2007 the S&P 500 and Yardini's Global Growth Barometer tracked each other neatly up to early 2012.

Then they started to diverge, in a big way. 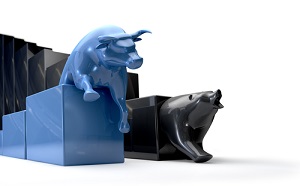 That extraordinary divergence means that either global growth (including U.S. GDP) has to explode higher, or stocks are in bubble territory.

Given the engineered positive impact buybacks have had on the market, I'm betting stocks will come down to earth long before economic growth lifts off the slippery tarmac it's taxiing on.

That may be one reason bullish investor sentiment has also fallen off a cliff.

The most recent American Association of Individual Investors' Bullish U.S. Investor Sentiment Survey shows that just 27.55% of surveyed investors are bullish. That's down from 29.75% last week. The most recent reading is fully 28% below the survey's long-term bullish average of 28.7%, and off a dramatic 37.6% from the survey's high bullish sentiment reading of 44.17% last year.

Sometimes the AAII survey is a contrary indicator, but when global growth is faltering as badly as it is now, with markets coming down from near all-time highs, the survey better reflects market and investor realities.
That reality doesn't look so rosy for buyback-prone companies. Here's what I mean...

How Buybacks Could Become Extremely Unpopular

By Friday, Feb. 12, about 75% of companies in the S&P 500 will have announced their earnings. That's important for investors hopeful that buyback announcements will boost the market, because companies can't announce buyback programs during the "dark period" up to one month before they come out with their earnings.

That makes sense, because the U.S. Securities and Exchange Commission (SEC) doesn't want companies trying to influence their stock prices as they're reporting earnings.

As an aside: Prior to the SEC adopting Rule 10b-18 in 1982, as part of the Reagan Administration's deregulatory efforts, stock buybacks by companies were generally considered "manipulative." But that was then, and I'm not suggesting a rule change wasn't in order, or that buybacks are manipulative. You decide.

So, while we're already hearing companies who've posted earnings announce share buyback programs, there will probably be a lot more coming, especially now that companies can buy their shares a lot lower than what they were paying not long ago.

But at the same time, investor sentiment about buybacks is also changing.

After witnessing hundreds of billions of dollars go down the drain, as stock prices fell below the average prices where companies were just buying overpriced shares, investors are increasingly having second thoughts about how that cash was spent, or how far into debt companies went to boost their stock prices in the short run.

On top of changing investor sentiment, presidential candidates are talking about how companies are wasting money on buybacks and not investing their shareholders' money back into America's productive infrastructure and creating jobs.

The market is a funny thing. It can be driven by sentiment and it can drive sentiment.

We're about to find out how positively investors feel about companies they own that are wasting their money as the market keeps slipping.

If the market falls much further from here, I'm betting the whole buybacks game will come under a harsh, negative light, warning investors that companies reloading hundreds of billions of dollars of buyback ammo may in the future be firing blanks.

While most people are watching the markets tank and praying for more buybacks, savvy investors are getting a shot at some of the easiest money ever - like 720% on Ralph Lauren... 650% on Amazon... 627% on Tesla - in a very short time. That's exceptional, no doubt, but these are the kinds of trades that can change your life. And Shah is teaching a small group of Members exactly how to make this type of trade. Go here now for all the details.