For Feb. 12, 2016, here's the top stock market news and stocks to watch based on today's market moves… 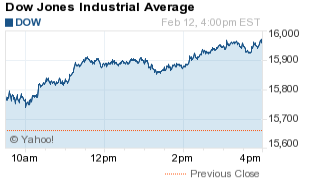 The Dow Jones Industrial Average today (Friday) gained more than 313 points thanks to a rebound in financial and energy stocks, which had faced a brutal five-day sell-off. Concerns about the global banking system and economic growth continue to weigh on investor sentiment; however, rising commodity prices and strong consumer data pushed the markets higher. Shares of Apple Inc. (Nasdaq: AAPL) were up on news that the company will unveil its next iPhone and iPad models on March 15. The firm said it will begin selling the next-generation models that same week.

On the economic front, New York Fed President William Dudley said in a speech at the Economic Club of New York that the U.S. economy has "quite a bit of momentum." He also brushed aside any chatter about the use of negative interest rates by the Fed. Meanwhile, the U.S. Commerce Department reported strong consumer spending in January, which should dismiss concerns about a recession in the near term. The U.S. dollar gained against a basket of global currencies as investors speculated on a possible rate hike in March.

Despite today's gains, the question still lingers – are we headed for a stock market crash, correction, or bear market? Here's what our Money Morning experts predict will happen in 2016…