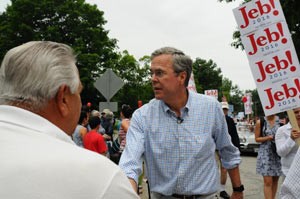 Jeb wasn't fazed, however, by what the media and pundits have called a "disappointing loss" or a performance standing equivalent to that of a "participation certificate."

In fact, Bush said his showing in New Hampshire was strong enough to keep his campaign alive in what he hopes will be a much more promising state: South Carolina.

"You have given me the chance to go on to South Carolina," Bush told an audience at his primary-night party in New Hampshire on Tuesday. "We are going to do really well there."

The former Florida governor does have a few tricks up his sleeve. And he's begun rolling them out in the Palmetto State over the past couple days.

1. Jeb launches attack against Gov. John Kasich and Florida Sen. Marco Rubio: Jeb's campaign has taken direct aim at establishment rivals Kasich and Rubio. An internal campaign memo circulated late Tuesday evening and picked up by The Washington Post highlighted lines of attack they plan to take against both candidates. The memo suggested that Kasich, who campaigned extensively in New Hampshire, does not have a realistic path to winning the Republican nomination.

"Governor Kasich has little to no chance in South Carolina, and does not have a national organization that can compete," the memo stated. "Kasich has consistently supported gutting the military and has no viable path in the Palmetto State."

The memo also outlined the Bush campaign's attack intentions on Rubio, raising questions about the Florida senator's maturity. "Rubio has demonstrated no respect for the nomination process and expects this to be a coronation," it stated.

"Jeb has dealt with crises as the governor of Florida, and he did so with steadiness and a calmness necessary in a good leader," the former president says in one ad, which began airing in South Carolina on Wednesday.

George W. Bush has appeared at fundraisers for the campaign and has also lent his name to fundraising emails. Most recently he starred in a TV ad for the pro-Bush super PAC Right to Rise USA. The radio ad marks the first time the 43rd president will appear in a campaign ad for Jeb Bush.

3. Jeb gets even more money spent on him: Right to Rise USA began shelling out even more cash before the GOP primary Feb. 20, according to The Washington Post. The super PAC intends to invest another $1.7 million advertising Jeb in South Carolina.

The group's spending will last the next eight days, increasing its total expenditures in the Palmetto State to more than $10 million. It is primarily paying for digital, radio, and television advertising with its latest buy.

4. Jeb adopts an alternative ego - the "anti-Trump": In recent weeks, the former Florida governor has redefined himself as the anti-Trump. "He's out to save his party from the specter of a nominee without qualifications or polish. He's shed his politesse to match Trump insult for insult," wrote The LA Times Tuesday.

"Donald Trump, you aren't just a loser, you are a liar and a whiner," Bush taunted on Twitter this week. 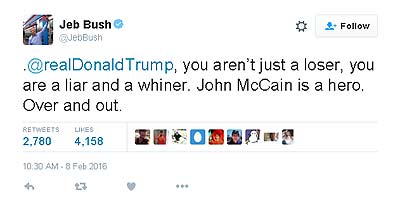 So he's the anti-Trump, but with a little Trump-ish attitude mixed in.

Now Graham has turned up the volume on his support.

"I'm going to make this a referendum on commander-in-chief," Graham said in Bluffton, S.C., on Wednesday. "The centerpiece of my campaign was defending this country, winning a war we couldn't afford to lose, and the reason I picked Jeb is I think he's most qualified to do the job."

Graham also issued a vague warning to other members of the GOP as they began arriving in the Palmetto State on Wednesday. "If you're not ready to play," he said, "don't come to South Carolina."

Coco Bonds? What a Cute Name! You wouldn't think something with a nickname like "coco bonds" would be so troublesome. But coco bonds - short for "contingent convertible bonds" - are a major reason for the pummeling that the stocks of several major European banks have taken in 2016. Here's everything you need to know about why this is happening - and why it matters to U.S. investors...

Oh really, just how would Jeb Bush shock them… ?

Jeb just doesn't seem to know when the American people are fed up with their viewpoint and lack of solutions.