Traders shook off their holiday hangovers and pushed the markets higher despite another wild day of oil price swings. 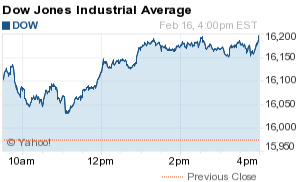 Check out the big gains for the Dow Jones Industrial Average, S&P 500, and Nasdaq today:

First up, Goldman Sachs Group Inc. (NYSE: GS) alumnus and current Minnesota Federal Reserve Chair Neel Kashkari shocked the banking industry in his first public speech today by suggesting it may be time to break up the big banks and ending "Too Big to Fail." The statement is somewhat curious given that Kashkari was an adviser to former Treasury Secretary Hank Paulsen when the agency allowed all of the banks to consolidate and get even larger. He also ran the bailout fund, one that greatly benefited his former employer, a company known for creating waves of financial crises.

In other U.S. Treasury Department news, former agency head and Obama economic adviser Larry Summers has called for the United States to ditch the $100 bill. Why? Summers says that big denominations allow criminals to easily transfer large amounts of cash illicitly. He notes that $1 million in $100 bills weighs just 2.2 pounds, while the same amount in $20 bills weighs roughly 50 pounds. Making criminals carry that sort of weight would make it more difficult to engage in money laundering… or it would just lead to criminals with bigger muscles.

Next, bad news for activist manager Bill Ackman. Hedge funds are jumping ship on his favorite stock, Valeant Pharmaceuticals International Inc. (NYSE: VRX), slashing stakes in the embattled drug company over the last quarter. The stock had been plunging due to concerns about the company's accounting and business practices. What are hedge funds buying instead? According to 13F filings, top managers are betting big on Morgan Stanley (NYSE: MS), Pfizer Inc. (NYSE: PFE), and American International Group Inc. (NYSE: AIG). But you should ignore what hedge funds are doing given their dismal performance in 2014. Rather than pay outrageous fees, you can do it yourself and thrive as an independent trader using these strategies.

Finally, in commodity news, gold bugs are in a panic after the yellow metal saw its single-largest decline in roughly 12 months. Gold slid more than 2.8%, but investors shouldn't fret. With central banks around the world experimenting with negative interest rates and increased volatility, today is just a small blip for gold prices going forward. Money Morning Resource Investing Specialist Peter Krauth explains why gold performed better than every other metal today.