I've been saying for some time that the U.S. Federal Reserve would be unable to follow through on its promises to raise rates at an aggressive pace. Given how stocks have reacted over the past month, the markets are coming to this same conclusion.

The S&P 500 has recently dipped to 1,850, a level last seen nearly two years ago. Almost 85% of the index is in correction territory – or worse.

Now the United States has joined the rest of the world in a profound bear market. But, like the wise saying goes, there's always a bull market somewhere.

As the tides may now have turned, that bull market appears to be in the precious metals sector. It's been absolutely crushing the rest lately.

So, today I'm going to show you some charts that point to positively gargantuan profits ahead – particularly for this one stock.

Have a look at this…

Gold Stocks Will Continue to Outperform in 2016

In a recent meeting with an executive from an Australian gold miner, he confided that a large Wall Street bank said precious metals is one of the only sectors seeing fund inflows.

Their take is that hedge funds are recognizing the deep value of a sector that's quickly gaining traction, and they're anxious to make up for their weak performance in 2015.

Well, that call is looking pretty sound, and I'm going to show you some compelling reasons why gold and gold stocks are both cheap and primed to move considerably higher from here.

Gold Stock Catalyst No. 1: The Dollar Could Be Running Out of Gas

After rising by an astounding 25% against its peers between mid-2014 until last month, the U.S. Dollar Index (USDX) is showing signs of cracking.

Of course the strength exhibited by the USDX came on the back of the Fed talking up its end to QE and the beginning of a rising rates cycle.

The last time the USDX closed above 100 was the week before the Fed officially raised rates in mid-December. Since then it had a sharp sell-off, followed by a rally which failed to hold above its 50-day moving average. 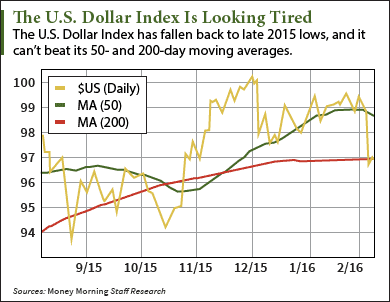 And in early February, the USDX sold off again, this time down to its 200-day moving average around 96.74.  As I write, the USDX is just below 96, a level it last traded at back in late October.

Now that the market's no longer buying the Fed's aggressive rate hike forecast, and Fed officials are "talking down" the dollar since it's hurting U.S. multinationals' profits, the USDX could well be on a sustained path downward for some time to come.

Gold Stock Catalyst No. 2: The Metal Bear Is Looking Tired, Too

Of course we know that bull markets follow bear markets. Precious metals are no exception.

There's plenty of research measuring the length of previous bear markets. In fact, the World Gold Council just highlighted that gold's five bear markets since 1970 were comparable in length and magnitude, averaging from 47 to 52 months.

With the current bear now at 50 months, odds are increasing that the bottom in gold is well behind us at this point.

Gold has had an impressive surge since touching a low of $1,050 in mid-December, climbing over 13% since.

Gold stocks touched a multiyear low about one month later in mid-January, blasting higher by a stunning 50% from 100 to 150 on the NYSE Arca Gold Bugs Index (HUI).

Now, before you conclude the gold stocks ship has sailed, consider that the HUI peaked near 600 in 2011 and printed an 80% loss since then.

In fact, the recent surge is practically imperceptible on a long-term chart. 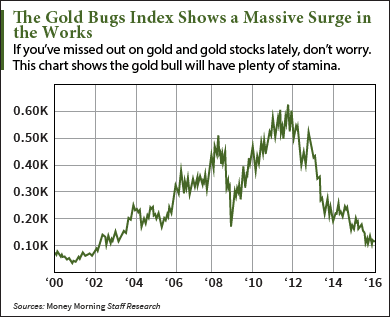 Despite that remarkable surge in the HUI, gold equities are still very cheap relative to gold on a historical basis.

The price of gold versus gold stocks is a great way to measure that relative value over time, and the simplest measure is the HUI-to-gold ratio.

A glimpse at the corresponding chart gives us some idea where we stand in this secular bull market. 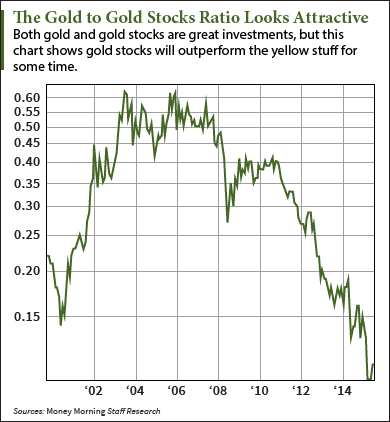 We've recently hit just below 0.1, which is astounding considering that gold is now trading at more than four times the price it bottomed at in 2000.

This is the lowest point we've touched since the entire bull market began, as well as on a historical basis. The ratio is now way lower even than when the financial crisis hit in 2008-2009.

At this level, gold stocks as a group would have to at least triple in value just to reach the average they've traded at relative to gold over the entire bull market to date. And that's if gold were to stay at current prices; not a scenario I'm expecting.

Should gold move higher, we could witness gargantuan returns from this sector, perhaps on the order of 300% to 500%.

Here's how you can play this opportunity.

The Best Way to Ride the Gold Stock Bull

Have a serious look at the Sprott Gold Miners ETF (NYSE: SGDM). SGDM is performance-related, rather than market-cap weighted. It tracks the Sprott Zacks Gold Miners Index, which is rules-based and rebalanced quarterly.

The Gold Miners Index seeks to identify about 25 gold stocks with the highest historical beta to the gold price. The weighting also depends on quarterly revenue growth year over year and balance sheet quality (long-term debt to equity).

Essentially, the rules-based method looks to identify quality rather than size and then allocates on that basis every three months. In tracking the Sprott Zacks Gold Miners Index, SGDM seeks out the healthiest companies in the sector and adds them to the ETF's holdings.

In addition to its focus on quality, there are a couple of other big reasons for investors to love the Sprott Gold Miners ETF.

SGDM comes with the standard fare that makes ETFs attractive: a low management fee of 0.57%, diversified holdings within the sector, and passive management.

With $103 million in assets and even a 1.43% annual yield, SGDM is a great option to gain exposure to gold stocks.

It's hard to find a more compelling sector that's ripe to outpace pretty much all of its competition.

Now, here's where Michael Lewitt buys his gold… As central banks destroy the value of paper money, investors could experience one of the biggest market collapses anyone has ever seen: the Super Crash. And when that happens, gold will be the last currency standing. In his 2016 Gold Briefing, Michael Lewitt shows you his favorite gold miners, ETFs, and physical gold dealers, plus tips on when and how to buy. Click here to access Michael Lewitt's free special report now and to receive his twice-weekly Sure Money.

How is silver doing?