Big cheers could be heard on exchange floors today as oil prices bounced higher and the Dow popped more than 250 points. A likely deal among global oil-producing nations overshadowed concerns about statements by U.S. Federal Reserve leaders during the last monetary policy meeting. 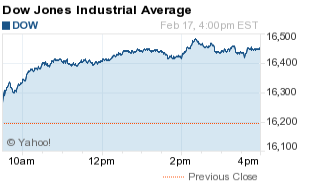 First up, energy prices dominated the news today, surging as much as 7%. The rally came after Iranian oil ministers backed a measure to freeze production levels in order to support price levels around the world. However, the freeze faces a number of different challenges, all of them being that many of these nations in and out of OPEC either don't trust each other, need more production to support their social budgets, or both. But investors are willing to take a wait-and-see approach. Global oil multinational giant Chevron Corp. (NYSE: CVX) rallied more than 4% on the news.

On the economic front, U.S. industrial production shocked economists by seeing its highest percentage increase in the last 14 months during January. The news is extremely positive given that the nation has experienced stagnant production levels during the same month in recent years due to weather problems or inventory challenges.

The industrial report was followed by the highly anticipated release of the Fed minutes from the January meeting. Federal Reserve policymakers effectively threw in the towel during their last monetary policy meeting. According to the minutes released this afternoon, the consensus among leaders of the central bank was… they have no clue whether ongoing market volatility will impede global economic growth. Previous minutes from other meetings included an assessment of global economic conditions, but that portion couldn't be found. Why the omission? Policymakers didn't know what to write.

"Most policy makers thought that the extent to which tighter conditions would persist and what that might imply for the outlook were unclear, and they therefore judged it was premature to alter appreciably their assessment of the medium-term economic outlook," the minutes read. Murmurs and curses about the Fed and its "nuclear option" could be heard as floor runners and traders took smoke breaks outside the Chicago Board of Trade.

But the lunchtime talk among traders – the big news – is what Warren Buffett did. He effectively called a floor on energy infrastructure stocks by building a stake in Kinder Morgan Inc. (NYSE: KMI). Shares of KMI stock surged nearly 10% on news Berkshire Hathaway Inc. (NYSE: BRK.A) built a stake in the firm over the fourth quarter. Shares had fallen as much as 75% over the last year as commodity prices and falling production dragged down midstream energy companies. But shares were churning today, as the company had the fourth-highest volume after Bank of America Corp. (NYSE: BAC), Freeport-McMoRan Inc. (NYSE: FCX), and Marathon Oil Corp. (NYSE: MRO).