Yes, Groupon stock has skyrocketed this week, prompting investors to wonder if an extended rebound is coming for GRPN stock. 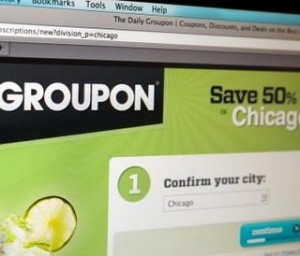 While some investors are wondering if they should buy into Groupon stock now, we've found a better investment opportunity for 2016 based on GRPN's 80% gain.

But first, here's why GRPN stock has plummeted…

Groupon was a powerful concept in 2010, connecting businesses with consumers.

Business owners discounted their goods and services, which attracted new customers and helped create repeat business. Customers in turn received a deal on products they wanted and found a business that they may have not known about without Groupon's help.

But because of the increased power of social media advertising, businesses have turned away from Groupon.

Business owners are finding they can reach billions of customers through Facebook Inc. (Nasdaq: FB) and Twitter Inc. (NYSE: TWTR) ads. Research company eMarketer projected that companies spent $23.68 billion on social media ads in 2015, which The Wall Street Journal reports is 33% higher than 2014.

So not only do Facebook and Twitter have massive user bases, advertisers also have a better chance of capturing the attention of potential customers because of the amount of time social media users are spending on those sites.

Groupon famously turned down a $6 billion buyout offer from Alphabet Inc. (Nasdaq: GOOGL, GOOG), and now has a market cap value of just $2.20 billion. So even though Groupon stock has rebounded this week, we don't recommend buying in.

This week's climb for Groupon stock did reveal another investment opportunity. Here's the stock and profit opportunity we're targeting now…

Groupon stock climbed this week when it was revealed that Alibaba Group Holding Ltd. (NYSE: BABA) owns a 5.6% stake in the company.

Some investors believe that Groupon could be a takeover target for Alibaba, as Chairman Jack Ma has a history of investing an initial stake in a company and then buying it later. Alibaba purchased roughly 18% of Chinese video site Yoku Tudou in 2014, and then purchased the remaining shares to have full control of the company in November 2015.

The bigger picture in this deal is how Alibaba is growing into a global powerhouse.

Money Morning Executive Editor Bill Patalon calls BABA a "legacy stock," which means it is a stock that you will want to hold forever.

Over the last three years, Alibaba has purchased companies in industries ranging from entertainment, tech, and retail. Two years ago, Alibaba purchased a 50% stake in China's most soccer popular team just as an example of how diverse Ma is making his company.

In a letter to shareholders on Oct. 8, Ma stated that the key priorities for the next decade will be globalization, development of the rural economy, and Big Data.

AliCloud, Alibaba's cloud-computing business and foothold in Big Data, opened up its second data center in Silicon Valley in October 2015. According to Tech Crunch, Alibaba is currently targeting locations in the Middle East, Singapore, Japan, and Europe for further expansion.

As far as global expansion, Alibaba is adding more and more stakes in U.S. businesses. Alibaba owns a 9% stake in toy and clothing company Zulily Inc., and owns a 39% stake in e-retailer ShopRunner.

Ma's company also invested an undisclosed amount in Tom Cruise's latest "Mission: Impossible" movie, which had a production budget of $150 million and has grossed $682,330,139 worldwide, according to movie data provider Box Office Mojo.

The Bottom Line: The Groupon stock price has skyrocketed over the last several days, but it's not because Groupon's business fundamentals are strong. Instead, GRPN climbed because Alibaba has invested in the company. The best move to make from this news is to own BABA stock. Its increasing global growth and presence as an up-and-coming provider of Big Data make Alibaba stock a long-term buy.

Will GRPN continue to go up? Especially with BABA buying millions of shares