Rallies don't last forever, that's what the baseball coach used to say. The same can be said about the markets, as the Dow reversed after a three-day winning streak. Investors can blame weak earnings reports and a sluggish performance from the banking sector. That said, savvy investors still found a way to make money no matter which way the market headed. 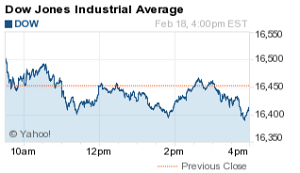 First up, the Dow was held back by Wal-Mart Stores Inc. (NYSE: WMT), whose shares fell 3.1% after issuing a weaker than expected quarterly profit figure and sales outlook. The firm slashed its sales growth forecast through 2017 to "relatively flat." Its previous estimates said growth would be up to 4%.

The chatter about the European Central Bank's desire to abolish its high-denomination currency went full terminal today. The ECB's President Mario Draghi is looking to eliminate the 500-euro bill as part of an effort to deter financial crimes and put pressure on nations like Switzerland and the United States to follow suit. However, this ploy is likely just another tool to weaken the currency as nations continue on a race to the bottom with high debt loads and negative interest rates. In fact, nearly 500 million people now live in countries with official negative-interest-rate policies, and the United States may be next. Here's an update on what is happening with the U.S. Federal Reserve and the ECB and why this massive betrayal is just in the first inning.

But the big news today came in the energy sector. Shares of Marathon Oil Corp. (NYSE: MRO) fell 6.5% after the energy giant posted its first annual loss in 20 years. The sharp downturn in oil prices over the last year pummeled the company, which announced big cuts to capital expenditures this year. The firm plans to reduce its capex levels by more than 50% in 2016.

After today's losses, investors are wondering if we're heading for a stock market crash, correction, or bear market. Here's what our Money Morning experts predict will happen in 2016…