While most investors are focusing on the dismal earnings and guidance figure, there's an even bigger factor that will impact the Wal-Mart stock price in 2016. And almost every investor is overlooking it… 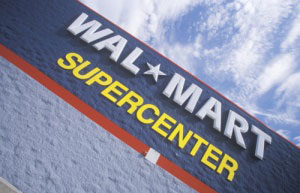 Wal-Mart also lowered its estimates for sales growth in fiscal year 2017, which began in February. The company said it expects "relatively flat" growth. Just a few months ago, Wal-Mart was projecting sales growth of 3% to 4%.

Company officials blamed the continued strength of the U.S. dollar and recently announced store closures for the lowered outlook.

Wal-Mart has been reducing its global presence. Last month, the company announced it would close 269 stores. U.S. locations account for 154 of the store closures.

One bright spot in the otherwise glum report was the 2% dividend hike. Wal-Mart's new annual dividend is $2.00 a share. It was $1.96 in 2015. That marks the 43rd consecutive dividend increase for Wal-Mart.

But Wal-Mart also continues to struggle in one crucial space that many are overlooking. And it's an area that will have an enormous impact on the Wal-Mart stock price for years to come…

Why the Wal-Mart Stock Price Will Continue to Lag

The biggest issue for Wal-Mart is its slow entrance and dominance in the growing e-commerce space.

In attempts to play catch-up, Wal-Mart has begun spending heavily on improving customers' online shopping experience. It's also been developing ways to integrate online and in-store shopping. Its mobile app has been another area of focus.

In October, Wal-Mart announced it would invest $2 billion into e-commerce over the next two years to help it better compete.

However, the ambitious plans fell flat with investors. The Wal-Mart stock price dropped more than 12% on the news. The drop was the sharpest decline for WMT stock in 25 years, wiping out $21.5 billion of WMT's market cap in a single day.

The company's poor earnings and dismal outlook are reasons alone to avoid Wal-Mart stock in 2016. The e-commerce issues make the decision even easier for us.