Despite beating earnings and user growth expectations in Q4 2015, the Facebook stock price has mostly been flat this month. And since FB stock opened at an all-time high of $115.27 on Feb. 3, it has dropped over 8%. 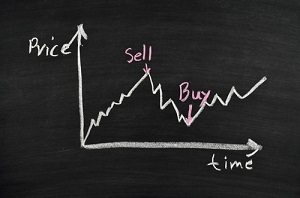 Although the market sell-off is weighing on Facebook stock, we're still bullish in the long term. In fact, today's price represents a great buying opportunity.

But before I discuss the specific reason why we like FB stock, I wanted to make sure that Money Morning readers understand why the market has had such a big impact on the Facebook stock price.

One of the biggest reasons for the market sell-off is crashing oil prices. Yes, Facebook has nothing to do with oil, but the fear of overproduction and issues with OPEC have made investors cautious. After all, oil prices have an impact on consumer spending habits.

The other major concern for investors right now is China. The devaluation of the yuan and slowing of the world's second-largest economy are contributors to the global sell-off. China's economy grew just 6.9% in 2015, which was its slowest pace in 25 years.

Finally, the U.S. Federal Reserve not ruling out negative interest rates and Janet Yellen's lack of confidence in the U.S. economy is causing investors to pull out of markets and not add new positions.

None of these three issues directly involve Facebook, but they have created panic in the markets. And that has caused many investors to sell their shares even of strong companies like Facebook.

Facebook stock is caught in the crosshairs of the volatile markets right now, but the discounted price is creating a great buying opportunity. And there is one major reason why we are so bullish on Facebook stock…

We are very bullish about Facebook stock because of its pipeline of new services and products, including:

Most of these services haven't even been monetized yet. But we believe they are all tremendous sources for potential new revenue growth.

But the biggest reason we expect revenue to soar is Instagram…

Between company officials sharing Q4 2015 results and shareholders asking questions, Instagram was the most talked about service during Facebook's earnings call.

That's because Instagram is one of the fastest growing social media platforms right now.

In September 2015, Instagram announced it had reached 400 million monthly active users (MAUs). That places the mobile picture app with 80 million more MAUs than Twitter, and 300 million more users than Snapchat CEO Evan Spiegel estimated his company had in developed countries in May 2015.

Zuckerberg also didn't provide exact totals on how much money Instagram netted in 2015, but research firms believe it was hundreds of millions. Firm eMarketer projected Instagram earned $600 million in 2015, and Credit Suisse projected it brought in $730 million.

By 2017, eMarketer projects that Instagram could grow so much that it could account for more than 10% of Facebook's total ad revenue.

The Bottom Line: The markets are very volatile right now, which has caused the Facebook stock price to drop. But for long-term investors with patience, now is a great time to add FB stock to your portfolio. Instagram will bring in more and more revenue as the service continues to grow, and Facebook still has platforms it hasn't even monetized yet.