The trading week ended with a thud on Friday after oil prices slid and materials stocks slumped in terrible fashion. Large-cap stocks Boeing Co. (NYSE: BA) and Chevron Corp. (NYSE: CVX) pulled down the Dow, while tech stocks bucked the trend and helped the Nasdaq eek out a gain. 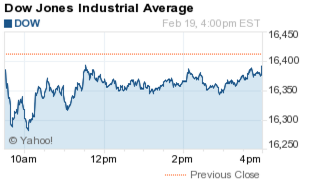 First up, check out the performance of the Dow Jones Industrial Average, S&P 500, and Nasdaq today:

First up, activist investor and Wall Street icon… Carl Icahn… had a no good, very bad day. Shares of Icahn Enterprises LP (Nasdaq: IEP) cratered more than 11% on news the S&P is considering a move to slash the firm's credit rating to junk status. The ratings agency issued the warning due to the stunning losses the firm has endured over the last few months. According to Reuters, the firm has lost "at least $1.4 billion in value" since September 2015.

Remember when the president said his healthcare law would drive down health insurance costs? Not only did the argument defy economic logic, but it also turned out to be a massive fib. According to U.S. Labor Department data released today, health insurance costs surged 4.8% over the last year, as insurers have been hiking premiums to cover the broader pool of enrollees. This was the fastest increase in prices since April 2013, and health insurance costs are significantly outpacing the wider inflation numbers. Health insurance stocks Aetna Inc. (NYSE: AET), Anthem Inc. (NYSE: ANTM), and Cigna Corp. (NYSE: CI) were all down on the day.

The inflation report indicated a big boost in the cost of home rentals as well. With inflation on the rise, the U.S. Federal Reserve could be motivated to increase interest rates gradually over the year. However, the futures markets aren't expecting an interest rate hike anytime soon. According to CME Fed Watch, the markets don't see the central bank raising interest rates until after February 2017.

But the lunchtime-talk among traders centered on the upcoming trial of bad boy hedge fund manager Martin Shkreli. Late yesterday, U.S. prosecutors announced a few witnesses who could testify to his securities fraud case are worried about retaliation. They said they have received threats from Shkreli in the past. Shkreli's lawyer called the charges and a request to delay a related lawsuit "preposterous." Prosecutors presented evidence in a brief that Shkreli "has taken steps to intimidate or threaten individuals in the past." This included "campaign of harassment" against an employee at pharmaceutical firm Retrophin in 2013.

Despite this week's rally, investors are still wondering if we're heading for a stock market crash, correction, or bear market. Here's what our Money Morning experts predict will happen in 2016…