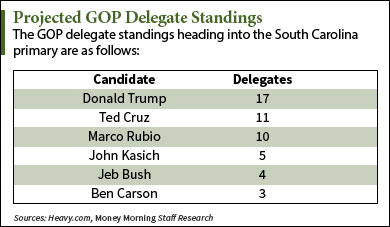 The 2016 presidential election will sweep through South Carolina this weekend. Republicans there will cast primary votes, with the Democrats to follow suit a week later.

What makes this South Carolina primary so crucial is the state's diversity.

You see, the Palmetto State is more representative of the country as a whole than the previous two primary states, Iowa and New Hampshire. The African American population is larger. So is the state's military presence, with its various bases and academies. South Carolina is home to a large evangelical community, as well as a sizable moderate retiree population along the coast.

So a win in South Carolina may prove the greatest indicator of a candidate's odds in winning the 2016 race.

But winning won't be easy.

Where the Chips Will Fall in the South Carolina Primary

GOP Frontrunner Donald Trump: The real estate mogul leads the South Carolina Republican primary by 5 points – down from his 16-point lead in the state a month ago, according to results from an NBC News/Wall Street Journal/Marist poll released yesterday. 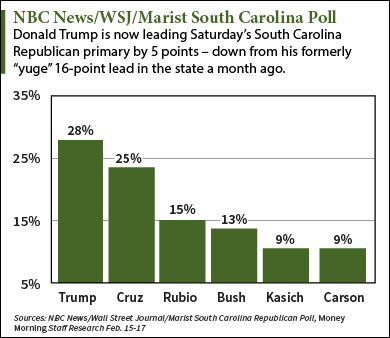 Texas Sen. Ted Cruz: While Cruz has taken a bite out of Trump's lead in the Palmetto State, he's also considered "the best organized among candidates in the race for South Carolina's evangelical vote," reported Politico earlier today. "He has been building out a conservative infrastructure here longer than anyone else, and continues to lead Rubio in most polls here."

Ohio Gov. John Kasich: There's a lot of speculation regarding Kasich's run after his New Hampshire victory. Southern conservatives may oppose Kasich's stances on Medicaid (he wants to expand the program under Obamacare) and immigration (he's against mass deportation). But enough of the state's moderates – the aforementioned coastal retirees – may turn to him to at least knock off a key rival, Jeb Bush.

There's No "If" – Only a "When": According to Donald Trump, ISIS will attack the Vatican. The GOP front-runner's grim prediction came in response to a comment made by Pope Francis. Here's what the else fiery real estate magnate had to say the Pontificate…