It's easy to worry about when to exercise your trades.

Especially when you're new to options trading.

If you exit your position too early, you could miss out on huge profits. But if you wait too long and the stock ends up "in the money," then there's a chance that the options will be exercised, and you'll be assigned the shares.

The key is knowing when to make your move.

And while normally I'm happy to take a double on my trades right away, there are times when it pays to wait all the way until expiration.

Let me show you the perfect example…

Waiting Until Expiration Could Deliver the Greatest Rewards 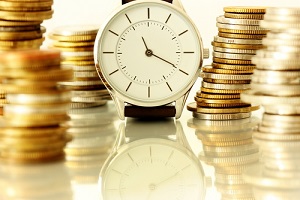 When you're looking at the type of volatility that we've seen all year, the idea of holding a position right up until its expiration date may not seem like the best idea.

Many traders believe that in-the-money options have a greater risk of getting assigned at expiration, which means that they'll need to cover the cost of the assigned shares. And this can drive them to exit their positions before expiration.

But we're going examine how this really works using a bull call spread – or loophole trade – as our case study.

Remember, a bull call spread is a bullish strategy where you buy calls at a low strike price while simultaneously selling the same number of calls at a higher strike price. The calls all have the same expiration date.

And the best part…

Since there's no transaction cost for this trade, your account is credited the amount of the spread (per contract) minus the cost of the calls you bought when you opened the trade (or the debit).

To maximize our profitability on this trade, PCLN needs to be at least $0.01 in the money at expiration. If this happens, then we're looking at a reward potential of $6.00 when the trade is executed.

Below is an image of this trade. To make things even easier, I've numbered the graph as follows: Remember that for every position you take on a trade, there's someone else on the other side of that trade.

And this is when a lot of beginner traders – especially those who are new to spreads – feel compelled to close the trade before the expiration date. Understandably, many fear that the options will get exercised, thereby assigning the stock to them.

Take a look at where this trade stands right now:

But when we're this far in-the-money, the likelihood of the stock remaining above $1,140 at expiration is pretty high. And if this happens at expiration, the trade will be closed, and we'll get the difference between the strike prices that we bought and sold the calls – $10.

This is a 150% return on investment compared to the 45% ROI we would have made by closing this trade before expiration.

And with a number like that, it pays to be patient.

This Could Be Your Best Risk-Management Technique: The New York Stock Exchange is eliminating stop orders on Feb. 26, but that's no reason to worry. We've got an alternative risk-management strategy has loss protection built right in – plus a trade that'll reduce your risk even more…