Yesterday, a Chinese train arrived in Tehran after a 14-day journey…

The freighter's arrival in Iran's capital marked the first expedition taken on just one route linked to a greater "New Silk Road."

"The arrival of this train in less than 14 days is unprecedented," said the head of the Iranian railway company, Mohsen Pourseyed Aqayi, according to a Yahoo! News post released yesterday.

You see, more than a third of Iran's foreign trade is with China, which is Tehran's top customer for oil exports, according to Yahoo! News. "The revival of the Silk Road is crucial for the countries on its route," Aqayi said. 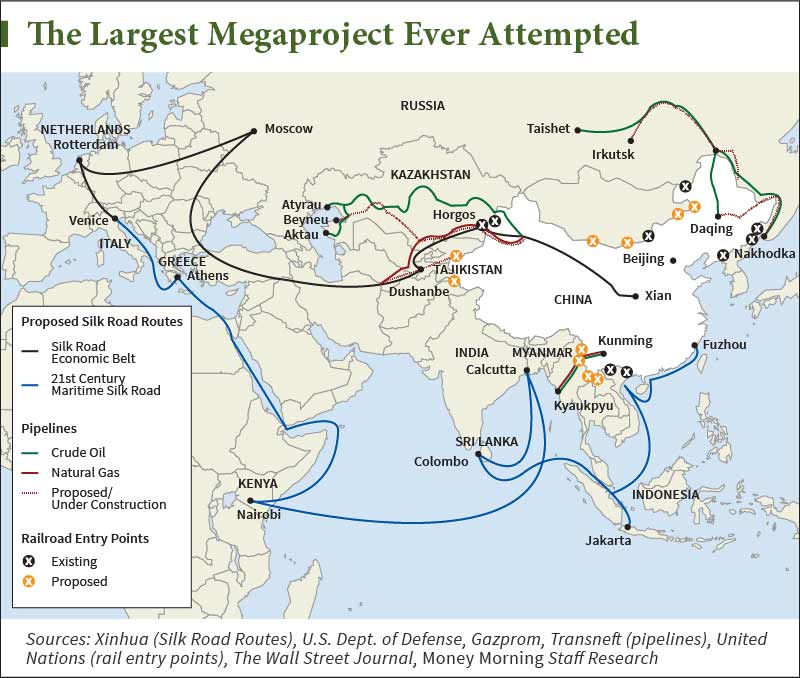 Altogether, the $600 billion project adjoining China to the rest of the world is being hailed as the largest economic development scheme on the face of the Earth.

Similar to global mega-infrastructure projects of the past, the New Silk Road represents myriad economic possibilities. And the project's success and expansion will bring with it political and military influence as well.

Just look at how the New Silk Road stacks up against three of the most memorable economic megaprojects in our history. These truly put its sheer magnitude into perspective…

If the sum total of China's commitments are taken at face value, the New Silk Road is set to become the largest program of economic diplomacy since the U.S.-led Marshall Plan for postwar reconstruction in Europe, covering dozens of countries with a total population of over 3 billion people.

The Marshall Plan was an American initiative to aid Western Europe after the Second World War in the reconstruction of its economy and infrastructure. Overall, the United States gave $13 billion, which approximates to $130 billion today. That's $470 billion less than the New Silk Road's total expected cost. 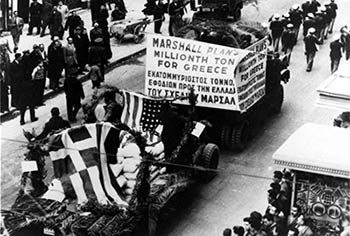 Like the Marshall Plan, reported Forbes on Jan. 15, the New Silk Road will help "boost China's soft power and establish greater influence in Asia. Economic development, as strategists in Beijing argue, will remove the appeal of radical Islam in China and Pakistan, Afghanistan and central Asia. As the U.S. is bogged down by wars in Afghanistan, Iraq, and now in Syria, China will play the 'good guy' who promises to bring economic prosperity to the region."

New Silk Road vs. the Panama Canal: In 1880, French engineer Ferdinand de Lesseps, with the consent of Columbia, began to construct a canal across the Isthmus of Panama that would link the Atlantic with the Pacific. But his efforts were thwarted over time by the onslaught of disease and loss of workers. In 1903, the United States stepped in to aid in the project.

At the time, the Panama Canal cost Americans around $375 million, including $10 million paid to Panama and $40 million paid to the French. It was the single most expensive construction project in U.S. history – averaging out in today's terms to cost approximately $6 billion. A far cry from the New Silk Road's $600 billion, but still… 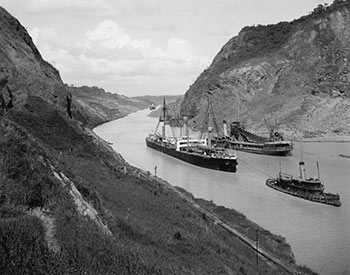 Like the Panama Canal, there is a military focus in the New Silk Road's construction. The U.S. military used the canal to pass warships from one coast to the other. China hopes to pass military factions through its New Silk Road pipelines. Particularly in the Western region of the country, which is troubled by tensions between its Muslim minority and Han majority. According to Forbes, "The New Silk Road program could be Beijing's silver bullet to solve the ethnic conflicts in the region and prevent Xinjiang from breaking away to become a renegade state – as some 'separatists' have sought to do in the past."

New Silk Road vs. the U.S. Interstate Highway System: The Federal-Aid Highway Act of 1956 that gave rise to the U.S. interstates transformed America. It brought markets together and created a national consumer base for roadside food, fuel, and lodging franchises. It also lowered shipping costs for factories located away from rail and barge lines.

China's New Silk Road will achieve no less. Local governments have already outlined a slew of projects aimed at connecting their provinces to Silk Road routes, reported Bloomberg on Nov. 25, 2015. In an April 2015 report, HSBC estimated that the various small-government projects tied to the New Silk Road within China could total $230 billion.

Two Energy Sector Facts That Pundits Keep Missing: Last week's IEA report on global oil demand projections pushed oil prices below $30 a barrel, though the report concluded demand worldwide is on the rise. And that's not the only thing the pundits missed. You see, this increase in demand is combining with another development to open up a range of new investment targets all across the energy sector…