The trading week got off to a stellar start today (Monday) after the Dow rallied more than 228 points and the Nasdaq popped nearly 1.5%. The markets rallied thanks to a huge announcement that two of the nation's largest defense companies explored a potential merger. 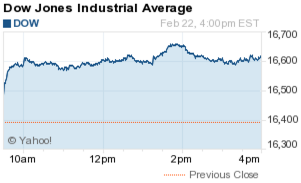 First up, WTI crude oil prices skyrocketed to a three-week high today thanks to a new oil market report from the International Energy Agency (IEA) and the declining U.S. rig count. WTI prices were up a whopping 6.2%, while Brent crude jumped nearly 5.5%. The surge was a huge boon to global oil multinational giant Chevron Corp. (NYSE: CVX), whose shares popped more than 2.7% on the day.

Bank of America Corp. (NYSE: BAC) stock rallied 3.3% after the firm unveiled a new mortgage product that would allow Americans to buy a home with as little as a 3% down payment. In addition, borrowers would be able to avoid private mortgage insurance, a deal that is far more favorable than what is available through the Federal Housing Administration.

But today's biggest story centered on rumors that United Technologies Corp. (NYSE: UTX) and Honeywell International Inc. (NYSE: HON) have been in discussions to merge operations. Shares of UTX jumped 4.8%, while Honeywell slipped 1.9%. According to reports, the two firms discussed a potential $94 billion deal that would face significant regulatory scrutiny. It is unclear if their large airplane clients Boeing Co. (NYSE: BA) and Airbus would also oppose the deal due to cost concerns.

Microsoft is another tech stock being written off by Wall Street right now. Many traders in Chicago and New York believe it has no prospects for price growth. But Money Morning Defense & Tech Specialist Michael A. Robinson thinks differently. Here are two big reasons why MSFT stock will soar this year…