The Fitbit earnings report was released after the closing bell today (Monday), and the wearable tech firm beat top- and bottom-line expectations.

Despite the strong earnings, the Fitbit stock price is down 45.8% this year. That – along with increasing competition – has many analysts convinced that shares of Fitbit Inc. (NYSE: FIT) will keep falling in 2016.

But Money Morning Defense & Tech Specialist Michael A. Robinson – a 34-year veteran of Silicon Valley and one of the top tech analysts working today – says there's one way you can still make money from Fitbit stock.

First, here's what you need to know about the stellar Fitbit earnings report today… 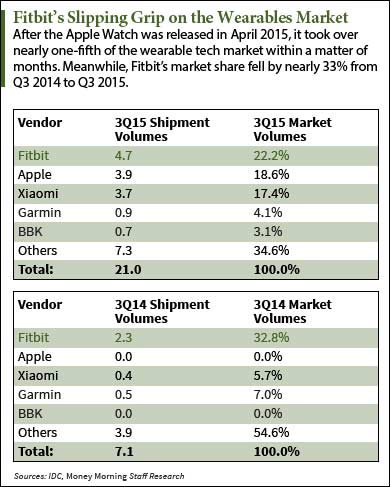 The company sold 8.2 million devices during the last three months of the year – a 55% increase from 5.3 million during the year-ago period.

The massive plunge this year is largely attributed to the Apple Watch's growing market share.

In Q3 2014 – before the Apple Watch hit the market – Fitbit controlled nearly 33% of the wearable tech market. Other competitors like Xiaomi and Garmin remained in the shadows with their 5.7% and 7% shares, respectively.

Why You Should Buy FIT Stock After Fitbit Earnings

Investors worry the Apple Watch's successful entry into the wearables market could pull FIT stock lower over the long term.

"The single biggest risk to the name and impediment to our call is if Apple were to launch a product that competes more directly with Fitbit's [hot-selling] Charger HR [device]," Brad Erickson, analyst for tech research firm Pacific Crest, said to MarketWatch last week.

But with another strong earnings report in the bag today, Robinson believes Fitbit is a strong rebound pick for short-term traders and investors.

"They definitely have a loyal installed customer base and strong profit margins on rising sales," Robinson said on Feb. 19. "I'm anxious to see year-end results and how well they did in the fourth quarter. I would say buy this only as a turnaround play for aggressive traders."

The Bottom Line: With another strong earnings report under its belt, investors want to know if Fitbit stock has long-term growth potential in an increasingly saturated wearable tech market. After all, a number of analysts see FIT stock falling lower due to the company's declining market share to the Apple Watch. But shares are due for a rebound this year thanks to the company's consistently strong sales performance. Right now, we recommend Fitbit stock as a turnaround play for bold traders with faith in the company's market dominance over growing competitors.

Tech IPOs Are in for a Volatile 2016… Only 23 tech companies went public last year. And 2016 is projected to be another bad year for the tech IPO market as big-name companies like Amazon and Apple endure a massive sell-off. Here's how bad tech IPOs suffered last year…

Dear Investors of Fit Bit: My comments on what I think about the future of Fitbit are that the analyst are not considering the underlying community faithfulness and loyalty to the product. I see Fitbit separating itself from other watch competition because the directors are focus mainly on producing a health products that are priced affordably to the mass of people in our fitness gyms. Fitbit was the first to get the HIPPA accredition on their products…that's BIG in the health industry. As of last week, March 15th, Fitbit announced it's collaboration with 2 other health monitor instrument companies, for a total enhanced package of future Fitbit products. Fitbit is in a good cash position to acquire a big Biotech company that will also separate Fitbit from other devices. Also, Fitbit for several years has held facilities warehouses in Eastern and Western Europe, which will position itself for the marketing expansion of the say Asian Millennium market. I see Fitbit as a diamond in the rough as Apple stock was a few years ago. Fitbit will with other stocks have a volatile year that will settle down after the elections, and especially the rise in gas prices. I feel the leadership of Fitbit is unique in the marketing of collaboration with insurance corporate insured employees to collaborate in lowered medical premiums. Let's face it Fitbit's marketing strategy is fully aware of what other watches are trying to achieve….but will always compete with a new product and positing. I guess, you have to be in this to see the cycle through, or don't get in. L.O.