It seems oil prices are poised to remain in the headlines for the next five years. Again, markets slumped after WTI and Brent prices fell, snapping yet another rally for the Dow Jones Industrial Average and Nasdaq. Thanks in part to ongoing volatility in the global crude markets, the S&P 500 is off more than 5% in 2016. That said, let's get to what traders were yapping about during Tuesday's session. 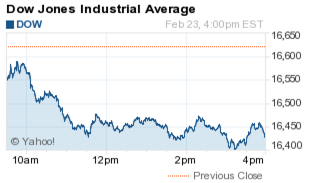 First up, WTI crude oil prices slumped again today as traders sold on a rally due to renewed concerns about a glut of oil on the global market. WTI crude prices were off 4.6%, while Brent crude slipped 4.1%. Energy prices are getting so bad that they are affecting the production of Brazil's largest oil producer. Shares of Petroleo Brasileiro SA Petrobras (NYSE ADR: PBR) cratered more than 4.2% after the firm announced plans to halt onshore drilling rigs in six Brazilian states.

It was a good day for housing stocks as a slew of economic data indicted positive momentum for the industry. Interest rates are low and demand is high. First, homebuilder Toll Brothers Inc. (NYSE: TOL) announced a stronger than expected boost to its quarterly revenue. Meanwhile, U.S. existing home sales hit a six-year high thanks to a swell in wages, credit access, and investor sentiment.

Is there bad blood between Microsoft Corp. (Nasdaq: MSFT) and Apple Inc. (Nasdaq: AAPL)? That's certainly how it seems after Microsoft CEO Bill Gates made a curious statement today. Gates told the Financial Times he believes Silicon Valley executives should increase their cooperation with legal authorities. The statement comes on the heels of a battle between the FBI and Apple over whether the tech firm should unlock the iPhone of a terrorist who spearheaded the San Bernardino attack.

But today's biggest story – what every pundit had an opinion about – is breaking news out of Yahoo! Inc. (Nasdaq: YHOO). According to unnamed sources at Reuters, Time Inc. (NYSE: TIME), best known as the publisher of Time magazine and Sports Illustrated, is exploring a deal for the core Internet business of Yahoo. Shares of Yahoo stock still slipped 1.6% despite news of a possible deal and an upgrade to "Buy" from SunTrust Banks Inc. (NYSE: STI). Last time that Time got into the Internet business, it didn't end well. Perhaps that's weighing on investor sentiment today.

After today's losses, investors are wondering if we're heading for a stock market crash, correction, or bear market. Here's what our Money Morning experts predict will happen in 2016…