Protecting your capital from threats is a bedrock principle of investing.

It's why investors seek the relative safety of bonds, for instance, or precious metals or the U.S. dollar.

But right now, there's a severe capital threat brewing, courtesy of the politicians who bailed out the banks after the crisis.

What's worse, this is very likely going to hit your cash "where it sleeps."

We've seen this coming for years now, and there's been a major new development (that was conspicuously absent from the headlines) that raises the threat level to "imminent."

But there's some serious upside to capture as the banks get more desperate. Here's what I mean…

The Precedent Has Been Set

It barely made a ripple in the news, but a small German bank, Maple Bank GmBH, was recently shut down by the German Federal Financial Supervisory Authority (BaFin).

Maple Bank is a niche investment bank that was central to the Porsche family's attempt to take over Volkswagen in 2008. Now, thanks to balance sheet overindebtedness and low equity levels, BaFin has judged Maple incapable of paying back all of its customers' deposits.

In Canada, Maple Bank operated as a focused player that issued mortgage-backed securities (MBS). It's a relatively small participant, but still had $3.49 billion of MBS outstanding.

Canada's Office of the Superintendent of Financial Institutions (OSFI) has taken control of Canadian assets of Maple. It said the move was to "protect depositors and creditors of the Canadian branch… and preserve the value of the assets…"  This is the first time ever the OSFI has taken such action on a foreign-based bank.

So far, it appears customers in Canada and Germany will be made whole thanks to their respective deposit insurance schemes. But thankfully Maple is small and not considered a threat to Germany's financial stability.

The same, however, can't be said for another German bank, whose specialized bonds could eventually be its downfall, and only the first of many dominoes.

These Bonds Are Pure Poison

There's nothing funny about the unique risks they represent.

My colleague David Zeiler recently did a great exposé on what these bonds are and why they're a serious problem.

As David explained, they were created in the rubble of the 2008 financial crisis as a way to drum up capital from skittish creditors. But, critically, they were also a way to sidestep taxpayer bailouts of big banks in the next crisis.

Investors and depositors have to understand exactly why they're so toxic…

Although they pay a coupon like regular bonds, they can be converted into bank shares if the bank's capital ratio drops below a preset level. That would cause bondholders to become shareholders overnight.

That's usually not a problem… if the bank is doing well.

But the European Central Bank (ECB) recently published the results of their bank stress tests. Surprise… The results revealed some major banks they oversee have dangerously low capital levels.

But no amount of smooth talk can change the fact that, thanks to billions in fines and costly regulations, Deutsche Bank's profits are drying up.

And they're not alone.

If Deutsche Bank's coco bonds do get converted, it will be the first high-profile bank bail-in, forcing bank creditors to help salvage the institution. There is a precedent in Cyprus on bank deposits, but that was a small-time stickup compared to the mother of all heists that may lie ahead.

The credit boom of the last seven years could be what drives this over a cliff. Trillions of dollars flowed into oil, car, and student loans, and even emerging markets, and these banks are exposed to virtually all of it.

So it's inevitable that some of these bonds will go bad and convert, and that's starting to affect European banks in particular… But this mess won't stay across the ocean.

And it's likely to be just the beginning.

By Its Very Nature, This Crisis Will Hit the United States

The global financial system is highly intertwined, as we've seen, so any failure in Europe will surely cause contagion to set in.

While American banks appear safer on the surface and haven't suffered quite the same level of selling, they, too, are at risk. Since the market's swoon, which began in December, U.S.  financials have lost twice as much as the S&P 500.

Sentiment is bad and it could get a lot worse. 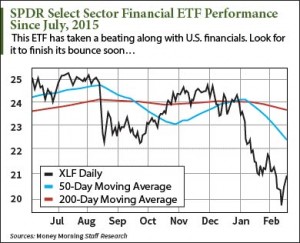 Though it's just bounced off recent lows, the Financial Select Sector SPDR ETF (NYSE Arca: XLF) is already about 20% below its July 2015 peak around $25.

I think there's a lot more downside to come, just not quite yet.

You may want to consider selling short the XLF, once it's finished its dead cat bounce.

A reasonable upside target before XLF heads south once again is around $22 per unit. That level acted as support back from late August until late September 2015. It also happens to be near the current 50-day moving average, which acted as resistance when XLF traded below it in December 2015.

So watch for XLF to bounce back up to near $22, which I think will become the new resistance.

When it rolls over, that will be your cue to go short and cash in as the financial sector continues to implode.

Deutsche Bank is about to trigger the "Super Crash." This very sick, mismanaged bank has a derivatives book worth a staggering $60 trillion. That makes it the riskiest bank on the planet right now. That $60 trillion is an anvil waiting to drop and smash the global economy. When (not if) this bank explodes, it will ruin millions of unprepared investors. But it also opens up some juicy opportunities, too. Click here for instant access to Michael Lewitt's special Investor Briefing on how to play this event and you'll get his Sure Money investor service, too. There's never a charge for Money Morning Members.

I believe now is the time to invest in gold, silver, oil coal,an other etc. Capitals. The dollar will go under. Bonds won't be worth anything. Sincerely Franklyn..

If you're a member of a credit union, how will this deposit to stock seizure/conversion affect you since there are no "shares" to own or convert to? Is credit union membership have a "hidden" perk is this regard?