And suspicions swirled about its strange layout and immense size…

It spanned 35,000 acres, roughly twice the size of the next largest airport in America.

Plus, the hub was covered in cryptic artwork, some of which theorists suggested alluded to the Illuminati, Freemasonry, and even satanic occultism.

These Denver airport conspiracy theories have never been put to rest…

In July 2013, nearly 20 years after DIA first opened, New York Magazine wrote, “Surely something macabre must be hidden in those billions of extra dollars; its city-scaled expanse; all those mysterious, unmarked buildings and extra hangars? And what about its swastika-shaped runways?” 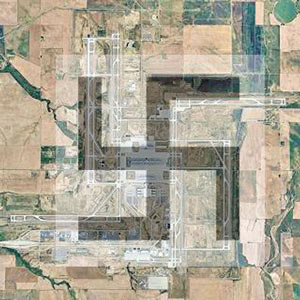 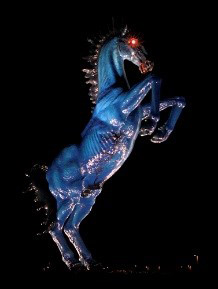 “There’s the 32-foot, 9,000-pound blue ‘devil horse’ sculpture out front, and a series of bright, disarmingly violent murals by a local artist depict apocalyptic biowarfare and the borderless, one-world government that will triumph.”

Looking for your next profit opportunity? Try our 90-page cannabis investing guide called "The Roadmap to Marijuana Millions"…

The infamous “Devil Horse” (a.k.a. “Blucifer”) is actually responsible for the death of its creator. In 2006, when artist Luis Jimenez went to remove its head for repairs, a piece of the sculpture broke off and severed an artery in Jimenez’s leg.

As far as the artwork iconography goes, there are loads of paintings with strange imagery that some “truthers” claim depict Nazi symbolism, particularly one mural – “The Children of the World Dream of Peace."

“In the foreground we see a soldier who looks, well, he looks like a Nazi soldier. There's a child wearing a Bavarian costume in there. Says one succinct theorist, ‘You're in the largest airport of America, in the middle of the U.S.A., and this is the mural we display. America joyfully submitting to Germany.’" 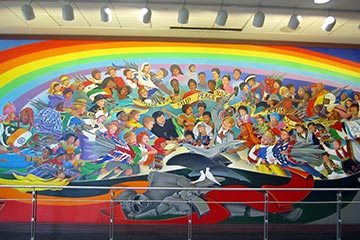 “The Children of the World Dream of Peace”

Though this “submission imagery” claim may be dubious (it looks more like the soldier is submitting to the throng of children attacking him, don’t you think?), the painting does come with a plaque quotation beneath it:

I was once a little child who longed for other worlds. But I am no more a child for I have known fear. I have learned to hate.... How tragic, then, is youth which lives with enemies, with gallows ropes. Yet, I still believe I only sleep today, that I'll wake up, a child again, and start to laugh and play.

This quote is an excerpt from a poem written by a 14-year-old boy who died in Auschwitz.

Gawker wrote: “All of which suggests to theorists that the painting was commissioned by the Illuminati/New World Order and that a Nazi uprising, via the underground bunker, is imminent.”

There are hordes of other inexplicable murals around DIA as well. Enough for their own conspiracy theory article alone.

But onward we go…

The Dedication Marker: One marker in particular garnered a lot of publicity when DIA opened – a capstone that’s been placed over a time capsule. The time capsule itself is rumored to house a credit card, a Colorado flag, and DIA opening-day newspapers, among many other things. It is set to be reopened in 2094.

But the symbols on the marker are associated with the Freemasons and mentions the “New World Airport Commission” – an organization that doesn’t actually exist. Gawker reported that Steve Snyder from the airport's public relations office says the NWAC is simply "a group consisting of local business and political leaders who sponsored and organized a number of pre-opening events at Denver International Airport."

Conspiracy theorists have also pointed out that "if you add up all of the numbers in the dedication date [on the capstone] March 1+9+1+9+ 9 +4, you get the number 33." In Freemasonry, the number 33 "represents perfection and the highest degree in Masonry you can hold," claimed Gawker.

But it’s the “bunker rumors” that are the most interesting…

The Underground Bunker and Tunnel System: The airport is home to numerous tunnels, including a tram that goes between concourses and a failed automated baggage system. This failed system was, in fact, blamed for the airport’s late opening.

But conspiracy theorists believe this excuse was used to hide the extra time needed to construct the airport’s vast network of secret tunnels. These tunnels supposedly connect bunkers underneath the hub’s floor. And these bunkers supposedly belong to the government in the event that Washington and other central government command centers are compromised.

As the story goes, when DIA was first being built, five immense buildings were somehow erroneously constructed. However, instead of being detonated or dismantled, these buildings were buried. The New York Times even claimed that a whistle-blowing construction worker came out to attest to this theory back in 1995. He said he’d helped bury them.

Unfortunately, this man’s original testimony is nowhere to be found.

“Truther” site Intellihub reported last May that, via the Freedom of Information Act, its team had obtained information that confirmed United Airlines Inc. is “involved with a Department of Defense (DOD) ‘Air Transportation Program’ contract likely connected to Continuance of Government [program].”

In other words, in a state of emergency, United Airlines would fly our top government officials to and from the Denver International Airport.

New Technology Could Create $2.86 Trillion in Wealth: The revenue growth is shocking. Last year, with a very limited release, it generated $70 million in revenue. This year, it's on track for $684 million. But over the next three years, the core technology could create $2.86 trillion in new American wealth. And this isn't just for the billionaires of the world. Many everyday Americans could become millionaires as well. Click here to see how you could be one of them…