It was a battle between the Apple stock bulls and the oil bears for who could swing the markets higher or lower today (Wednesday). As we've warned for months, investors are finally waking up to the fact that many banks are highly vulnerable to the swelling debts of energy companies in a low price environment. There are many stories we have warned about and profitable stock plays that some were left out on owning. But that's why we lay out the top stories each day… 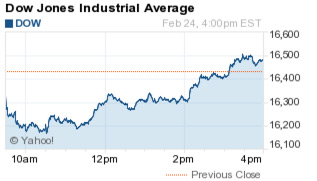 First up, it appears that if we're going to get any value in the market, it's not coming from organic growth anytime soon. Companies are relying on mergers and acquisitions, stock buybacks, and dividend hikes in order to boost shareholder value. This is all coming under pressure from activist investors, including private equity firms and hedge funds.

Today's deal news centers on Yahoo! Inc. (Nasdaq: YHOO). Shares are on the move after a major shareholder, Canyon Capital, is pushing the firm to move quickly and sell its core Internet business. The private equity firm joins activist Starboard Value in pushing the firm to sell. On Tuesday, Reuters reported that Time Inc. (NYSE: TIME) is considering a deal with the firm, along with Verizon Communications Inc. (NYSE: VZ).

Oil prices were on the rise today, with Brent crude jumping 3.4%. Prices have been seesawing over the last 24 hours due to concerns about record crude inventory levels. According to the Energy Information Administration, U.S. crude levels jumped by 3.5 million barrels last week to put inventory at an all-time high of 507 million barrels.

Next, need more evidence that currencies around the world are in crisis mode? We've got you covered. This morning, the UK pound fell to its lowest level against the U.S. dollar in seven years, and economists don't anticipate a reversal from this downturn any time soon. Yesterday, the pound fell below $1.40 for the first time since 2009. So what's fueling this decline? Right now, the nation is having a broad debate about whether it should depart the European Union, an event widely known as the "Brexit." The country will first have a referendum vote in June to consider changes to the nation's membership terms.

The International Monetary Fund warned that Britain's referendum could destabilize the nation's economic recovery. The IMF also warned it might slash its global growth forecast unless countries reach an accord to boost government spending in the near future. Once a Keynesian, always a Keynesian, even if spending more taxpayer money and increasing government debt over and over should be in the dictionary as the definition of insanity.