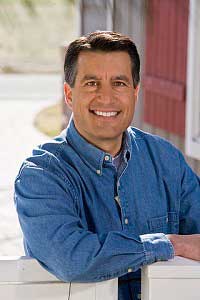 News broke earlier this afternoon that the White House is considering Republican Gov. Brian Sandoval of Nevada for the Supreme Court vacancy.

Exactly who is Brian Sandoval?

Gov. Sandoval is a former federal judge with a moderate record. He was confirmed unanimously in a 2005 Senate vote but stepped down from the bench in 2009 to run for Nevada governor.

Two unnamed sources told The Wall Street Journal (which was first to speculate on Sandoval's appointment today) that Senate minority leader Harry Reid, also from Nevada, met with the governor on Monday. Sandoval is purportedly not objecting to the process moving forward.

"The selection of a moderate Republican to fill the vacancy could complicate the politics in the Senate. Senate Republicans said Tuesday they wouldn't hold a confirmation hearing until the next president is sworn in. Senate Majority Leader Mitch McConnell (R-KY) and other leaders said they weren't likely to meet with a candidate since the new president should make the selection," reported The Wall Street Journal.

President Barack Obama has said he won't back down on sending a candidate to the Senate.

On Sunday night, Sandoval sat at the president's head table at a White House dinner for governors.

There's No Standard for What Makes a Bear Market: It's a big lie. There's no official body to set the standard. And besides, in a world with so many different markets – all with widely different betas and standards of volatility – there can be no universal standard to apply to all markets, all instruments, and all commodities. Not by any stretch of the imagination…