As we predicted this morning, a strong durable goods order report offset concerns about the U.S. economy and sluggish oil prices. Markets rallied as manufacturing data signaled renewed confidence that production of durable goods is shaking off a weak December-ending quarter. How long can the rally hold for? That's what we're going to find out tomorrow (Friday) when the U.S. Commerce Department reports its second revision of GDP for the fourth quarter. 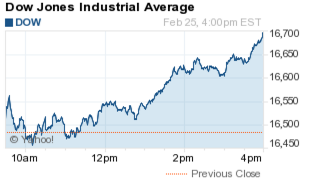 Oil prices were on the rise today, with Brent crude jumping 2.6% to $35.29. Traders appeared optimistic about news that global oil producers plan to meet in March to discuss a proposed production freeze. However, as Money Morning Global Energy Specialist Dr. Kent Moors explains, markets and commentators seem to be missing the fact that what is happening with falling oil prices over the last year isn't an oil supply problem. It's a supply expectation problem. This is the energy elephant in the room that no one is talking about and you need to know moving forward.

But the big talk this afternoon centered on the U.S. Federal Reserve and global markets. All hands are on deck at the Fed to assure investors the U.S. economy is growing stronger and that 2016 will not feature a recession. This afternoon, San Francisco Fed President John Williams praised the health of the economy despite the stock market's volatility over the last two months.

However, what stood out from Williams' speech today was a statement that falling oil prices were not a threat to the financial sector, which is already off more than 12% so far this year. He must not be paying attention after several prominent banks – including JPMorgan Chase & Co. (NYSE: JPM) – announced they will need to raise reserves to offset their exposure to the sector. Williams may also be ignoring a perfect storm of oil prices, exposure to a flailing European banking sector, rising debts, negative interest rates, and sluggish economic growth in China. He remains confident the Fed will continue to raise interest rates this year…

Speaking of which, how about that interest rate hike, huh? Mortgage rates slumped to their lowest levels since February 2015, according to mortgage giant Freddie Mac. A 30-year fixed-rate mortgage averaged 3.62% this week, down from 3.65% a week ago.