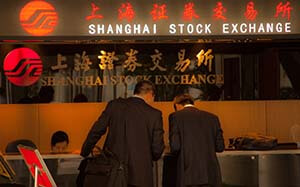 But first, here's why the Chinese stock market crashed today...

The Shanghai Composite Index plunged 6.4% to 2,741.25 Thursday. It was the worst percentage drop for China's key benchmark since Jan. 26. The index is now down 47% since last summer's peak.

The smaller Shenzhen Composite Index ended the session down 7.3%. China's Nasdaq-style ChiNext board tumbled 7.6%. More than 1,300 stocks in Shanghai and Shenzhen fell by 10%, the maximum level that Chinese authorities allow an individual stock to fall in one day.

A slowdown in China, the world's second-largest economy, has spooked investors the world. In January, China reported 2015's GDP was 6.9%. That was the lowest rate in a quarter century.

According to Money Morning experts, the China stock market crash has a direct impact on U.S. investors and their money. And that's a trend that will continue through 2016...

What a China Stock Market Crash Means for U.S. Investors

The MSCI All-Country World Index, a broad benchmark of global stocks, slipped into a bear market on Feb. 11 when it closed 20% below its April 2015 high. And the China stock market crash was a major part of that.

According to Money Morning Global Credit Strategist Michael Lewitt, there were several factors over the last two years that have created this downward pressure on the Chinese stock market...

And that's not the only problem facing U.S. investors. Corporate earnings are also falling at an alarming rate.

With 87% of the S&P 500 reporting, Q4 earnings reflect an average decline of 3.6%, according to FactSet. If that pace holds, profits for the benchmark will have fallen for three straight quarters for the first time since 2009. Companies that deal with China directly could be in for even more pain.