Apple stock news: The barrage of stories this week about disappointing Apple Watch sales is a lesson in why investors need to be cautious in how they consume company-related information. 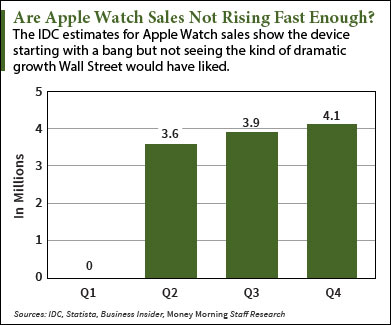 Most troubling was the fact that sales increased only 5% from the previous quarter, so the Apple Watch failed to get a significant boost from the holiday shopping season. Compare that to iPhone sales, which rose less than 1% year over year but were up 55% from the prior quarter.

That resulted in some pretty negative headlines:

The Apple Watch story plays into the narrative that Apple can no longer hit tech home runs like the iPhone. And by the way, the story goes, the iPhone is a "mature" product that can't deliver the growth Apple needs.

This is the sort of AAPL stock news that would lead an investor to believe that the company's glory days are over and that any money put there will languish.

The problem is, it's a very narrow interpretation of what's going on with Apple right now. And it's based on assumptions that may or may not be true.

In the case of the iPhone, the naysayers have mostly discounted the impact of iPhone sales growth in large, expanding markets like China and India as well as the reality that with global market share of about 15%, there's plenty of opportunity to eat away share from Android.

There's even more cause to doubt the aspersions now being cast on the Apple Watch.

I almost don't know where to begin - let's start with this problem in the sales estimates...

The first thing to note here is that only Apple CEO Tim Cook and a few of his top lieutenants know for certain how well the Apple Watch is doing.

Unlike iPhone, iPad, and Mac sales, Apple has chosen for the time being not to break out Apple Watch sales.

That means everybody is guessing. And what most of those Apple Watch news stories failed to note is that these estimates can vary quite a bit.

Those gloomy Apple news stories also failed to mention the sunny forecasts that several research firms recently have made for the smartwatch market and Apple's role in it.

"From 2015 through 2017, smartwatch adoption will have 48% growth largely due to Apple popularizing wearables as a lifestyle trend," Angela McIntyre, research director at Gartner, said in a Feb. 2 statement. "Smartwatches have the greatest revenue potential among all wearables through 2019, reaching $17.5 billion."

Just last week Strategy Analytics pointed out that smartwatch sales of 8.1 million units in Q4 eclipsed Swiss Watch sales of 7.9 million - and that Apple took 63% of those sales.

Think about that - a product you couldn't buy until April of last year already has nearly two-thirds of the market.

And that raises another point: The Apple Watch is the newest member of the Apple device roster. Its success or failure is not something anyone will be able to declare with certainty for at least another year.

Let's put that in the context of two other major Apple products, the iPad and the iPhone.

The iPad debuted in 2010 and was at first lauded as another shiny cog in the Apple growth machine. But iPad sales have been declining since 2013.

As for the iPhone, Cook recalled a telling little bit of history in a company town hall meeting earlier this month. He said that sales of the Apple Watch in the December quarter exceeded sales of the original iPhone in its first holiday quarter back in 2007.

So who's to say at this point whether Apple Watch sales are a disappointment or not?

One reason for the general perception of the Apple Watch as a failure are the inflated expectations that greeted the device in the hype leading up to its April debut.

Although Apple made no fantastic predictions at the time, plenty of analysts sure did.

A Fortune survey of Apple analysts in March showed an average prediction of 22.47 million Apple Watch sales for calendar 2015. The two highest forecasts were for sales of more than 40 million!

Given IDC's latest estimates, Apple supposedly sold 11.6 million smartwatches in 2015 - about half of what the analysts were projecting before it went on sale.

That the Apple Watch failed to meet those expectations says more about the people who made the forecasts than it does about Apple's ability to meet them.

So it pays to be cautious with provocative Apple stock news - especially when such "conventional wisdom" is based on conjecture.

The Bottom Line: The Apple stock news that reported lower than expected Apple Watch sales for the December quarter was essentially guesswork. But that didn't stop many in the financial media from concluding the product had failed. The episode illustrates why investors need to be cautious about making decisions based on shaky information.

How to Play Tech in China: Worries about slowing Chinese growth ignore the fact that China still has many years of strong growth ahead of it -- growth that will feed hefty profits in tech. The problem for investors is figuring out just how to tap into this tantalizing combination. Fortunately, Money Morning Defense & Tech Specialist Michael A. Robinson has found a way...