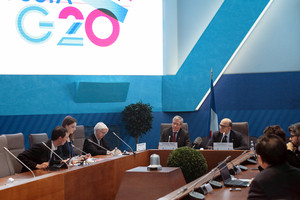 Nothing moves the Dow Jones Industrial Average like a fresh round of stimulus, and we could be looking at the mother of all stimulus plans as the G20 kicks off its two-day meeting in China. World leaders, central bankers, centralized planners, and their "yes men" will be gathering to discuss new ways to boost the world's sluggish economy. While bold measures like structural reforms (re: less reliance on debt-based growth) are greatly needed and would help instill confidence, early reports indicated there will has been a lot of internal squabbling among idea generators.

With the mood brighter on this Friday, let's tackle your top stock market news, stocks to watch, and economic calendar for Feb. 26, 2016.

Investors want to know if we're headed for a stock market crash, correction, or bear market. Here's what our Money Morning experts predict will happen in 2016...