The Dow Jones Industrial Average couldn't leap higher on Leap Day despite news China is on a path to boost stimulus efforts in order to re-, re-, re-, re-jump-start its struggling economy. Still, Warren Buffett said U.S. stocks will spring forward with big returns in the future. On an important day of economic data, Buffett's shareholder letter and morning market interview dominated the day-time discussion about the U.S. economy and stocks.

First up, check out the results for the Dow Jones Industrial Average, S&P 500, and Nasdaq 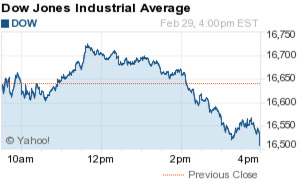 Traders kept a close eye on data for any clues about the health of the U.S. economy and to predict whether the Federal Reserve plans to increase interest rates in 2016. This morning, contracts to purchase existing homes fell to a one-year low, likely due to bad winter weather and a shortage of available housing inventory. Meanwhile, the Chicago PMI contracted in February as U.S. factory activity remains lower due to a strong dollar, oil prices, and falling overseas demand.

The People's Bank of China – you know, money… for people – announced it will slash its reserve requirement ratio for the fifth time over the last year. This will reduce the amount of money banks are forced to hold as reserves and permits the increase of leverage in an economy – because when has that ever gone wrong?

Starbucks Corp. (Nasdaq: SBUX) caused a stir today on news it will boldly attempt to enter the Italian coffee market, news that jolted investors and espresso drinkers alike. In fact, the firm will place its first Italian location in the birthplace of espresso – Milan, Italy. This is a bold decision by the company, whose founder developed the idea for Starbucks 33 years ago while on a business trip to the region, which has a very rich coffee culture. Starbucks has struggled in other foreign markets like the United Kingdom and Australia in the past.

Oil prices jumped more than 3% on news Saudi Arabia plans to work with OPEC partners and other producing nations to freeze production and reduce market volatility. Despite the news, shares of Chevron Corp. (NYSE: CVX) and Exxon Mobil Corp. (NYSE: XOM) fell by 1% and 1.9%, respectively. Make no mistake about it, oil prices are heading higher. Be sure to check out how you can profit from the "Great Oil Turnaround" of 2016. Read it here.

Merger mania reared its head again. Shares of Icahn Enterprises LP (Nasdaq: IEP) jumped another 3.7% after the activist fund announced it would try to purchase remaining shares of Federal-Mogul Holdings Corp. (Nasdaq: FDML), which jumped nearly 46% on the day.

But the big talk today was CNBC's morning interview with investment legend Warren Buffett. The chairman and CEO of Berkshire Hathaway Inc. (NYSE: BRK.A, BRK.B) said he was bullish about the U.S. economy and said the "country will grow in value over time." During the interview, Buffett raised concerns about negative interest rates in Europe and Japan and said privacy has its limits when asked about the ongoing battle between the FBI and Apple Inc. (Nasdaq: AAPL). In addition, Buffett said he doesn't regret buying shares of International Business Machines Corp. (NYSE: IBM), which have fallen 19.1% over the last year. Finally, Buffett praised Bernie Sanders' ability to stick to his original political message and not changing it on a week-to-week basis like other politicians. Buffett is a supporter of Hillary Clinton.

Oh, and by the way, Berkshire reported that fourth-quarter profits jumped a pretty 18%, while revenue increased by 7% to $51.82 billion.

"Super Tuesday" is tomorrow, March 1. On Super Tuesday 2016, 12 states and one U.S. territory will hold their primary elections in what amounts to an electoral frenzy. Here's everything you need to know about one of the most important events of the election cycle…