Editor's Note: This research would normally go to paid-up subscribers of Kent's Energy Advantage, but the end of oil's long decline has huge profit potential for every investor, and Kent wanted to give everyone the chance to learn about this upcoming market shift.

We've been able to make energy profits during the oil bear because I'm tracking opportunities outside of petroleum. One of my favorite alternative "oil-killer" energy plays, for instance, is up 45% since I recommended it. The global energy balance is simply shifting to favor these alternative energy sources.

But oil is still vitally important, and I'm pleased to report that it's going to be a bigger source of profits moving forward…

You see, towards the end of February, we saw signs that oil is about to turn the corner, with oil prices shooting up 8.5% in a single week.

While they later fell a bit, showing that volatility is still the name of the game, make no mistake…

A sustained rise in oil prices is coming.

To prepare for this trend, I've put together a plan for us to profit.

I'm tracking several companies across four different categories, but this one strategy will get you perfectly positioned to capture the biggest possible profits from the coming end of oil's decline.

In a moment, you'll see exactly how this plan will work.

But first, here's what's changed to allow for this turnaround in oil prices…

"Supply and Demand" Isn't What It Used to Be 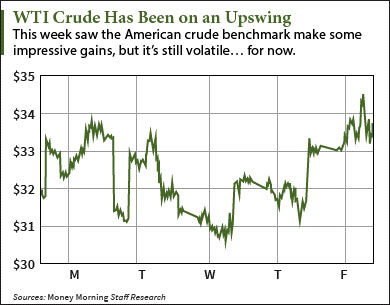 The normal balance between supply and demand is no longer operating.

For the first time in my memory, which in matters of oil and energy stretches back some four decades, a protracted supply surplus has changed the equation.

More oil has been taken out of the ground than the market can digest, and huge new extractable reserves are available for withdrawal in short order.

The result has investors wondering how to handle the situation.

Yes, demand is increasing globally, and it will (as it usually does) increase even more as we move from the first to the second quarter of the year.

But demand will not rise quickly enough to match the additional oil that can now easily be brought forward. With the world's main oil-producing countries now bringing forth record amounts of crude, all market attention is drawn to the supply surplus.

And that makes manipulative moves against oil such a popular pastime these days with hedge funds and short artists. These folks put additional downward pressure on oil.

Now, there's only one easy way to reduce these distortions…

Oil-Distorting Players Have Moved the Price by Over $10

Oil will play a large role in the global energy markets, to be sure, but it's no longer the juggernaut it once was. So, while we prepare to profit on oil's renewed stability, it's important to look at where the future of energy is headed…

The viability of solar and wind aren't in question anymore; both are a staple of the energy balance worldwide.

But the biggest profits go to the trendsetters. Their stocks always pop first, giving rise to sustainable, long-term gains.

I've identified those companies central to the next wave of energy profits. In fact, my latest solar recommendation is a global leader in the industry.

It's time to pull the trigger on this one…

Click here to find out how to get straight to Kent's buying instructions… or click here to learn more.

Eliminating the contortions in the price of oil caused by shorts and derivatives will require "paper" barrels (futures contracts) to trade in rough proximity to "wet" barrels (the actual market price for oil on delivery).

My algorithm for estimating these distortions suggests that, as of Feb. 19, West Texas Intermediate (WTI, the benchmark crude rate set in New York) is trading $13 below its actual price, while Dated Brent (the equivalent benchmark set in London) is almost $16 lower than it should be.

Without a large difference between the prices of "paper" and "wet" barrels, there's no margin to profit from these distortions.

Now, that difference will only disappear once there is some assurance that the supply of crude oil moving into the market has peaked. The OPEC-Russia deal to "freeze" production goes some way towards accomplishing that goal.

But until the market feels like it has this assurance, Chicken Little from The Sky is Falling Brokerage House can still go on television and manipulate the market to his heart's content.

Which brings us to this important point. Keep this in mind…

What you hear about the supply glut on TV is based on a pronounced fallacy.

Supply never needs to balance demand. If it did – if there was no surplus – prices right now would be well above $140 a barrel.

Remember, we had significant excesses of oil in Cushing, Okla. – the primary confluence of pipelines in the United States, where the WTI price is actually determined – 18 months ago.

And the price back then was still well over $100. Instead, prices come down to investor perception…

And the ability of a few to direct, or more accurately, to misdirect that perception.

But when you can see through this deception, as we can now, you have the advantage over the distorters.

Here's how we'll press that advantage…

Here's the thing… We don't need a major pop in price to generate nice profits, especially in a market where the oil sector has been significantly oversold.

Instead, price stability is the objective here, not price acceleration. There is little advantage in inflating prices beyond market tolerance. That merely accentuates problems in the other direction.

You see, unlike earlier cycles, your returns won't be coming from a rise in aggregate oil production. Rather, you're going to profit (at least initially) from the usage of supply already out of the ground.

All of which points toward companies I am tracking for early indications of the bounce. They are in four categories:

Now, let me be clear: Energy Advantage subscribers will not be moving on all of these fronts at the same time, and each move will require certain particular market triggers to be hit first.

This approach is necessary because this is not an environment in which all companies in a given market segment (e.g., pipelines; refineries; swing producers; wholesalers) will be impacted the same way.

Now, Energy Advantage subscribers take note: When we do move, it'll be quick. So get ready.

And rest assured I'll be selecting these companies based on a combination of position, financial condition, structuring, and access.

I'll do the heavy lifting; you sit back and make the money.

Dr Moors, Have you any news about the natural gas being shipped from our shores? What interesting information can you give about profit or loss?

Thank you for keeping track for those who have never been in these "times" before. Mildred

SUNE is up and down like a ping pong ball that was missed. I bought some shares $3-5, later I saw a chart that had early prices as high as $33. It appears those people have questions about contracts that have been signed and the abillity to complete them. What happens if the company is sold??