Come on, given what's happening in Europe right now, you didn't really expect the financial sector to provide a big boost to the markets today, did you? Well, that's what happens when China decides to loosen monetary policy so much that their banks are getting close to dropping cash out of helicopters. A wealth of strong economic data gave the Dow Jones Industrial Average and S&P 500 nice boosts, while tech stocks pushed up the Nasdaq.

You'll be shocked at what happened in the markets on Tuesday, March 1, 2016. 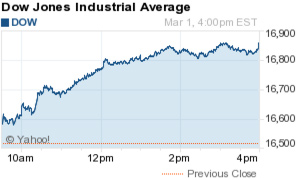 The banking sector had its best day in weeks, boosted by more economic stimulus from China and strong U.S. economic data – and that came even with Barclays Plc. (NYSE: BCS) offering a horrendous annual report this morning. Shares of Morgan Stanley (NYSE: MS) and Citigroup Inc. (NYSE: C) both surged more than 5%.

Oil prices rose to their highest level in eight weeks thanks to Wall Street's rally. But at the end of the day, we all know it was related – as everything was – to China's stimulus news. Later this week, data will likely indicate another rise in U.S. crude inventories, but that didn't stop WTI prices from gaining 1.9%. In other news, Russian President Vladimir Putin said his nation's oil companies have agreed to freeze production levels; however, Putin also said there has been no formal agreement between oil-producing nations to do the same. Here's more on why oil prices are rallying.

Today is Super Tuesday, a day when 12 states and one U.S. territory participate in primary elections. Democratic front-runner Hillary Clinton and GOP front-runner Donald Trump are widely expected to win a large number of states today, setting up what will likely be one of the most vitriolic U.S. elections in American history. Congratulations, America. Just eight more months of this!

"Super Tuesday" is today, March 1. On Super Tuesday 2016, 12 states and one U.S. territory will hold their primary elections in what amounts to an electoral frenzy. Here's everything you need to know about one of the most important events of the election cycle…

The big talk should have been about the state of the global manufacturing sector. However, that was largely ignored by the surge in banking stocks. That said, this overshadowed data is still going to be there when the sugar high wears off tomorrow.

For the fifth straight month, U.S. manufacturing levels contracted (albeit at a slower pace than during that stretch). According to the Institute for Supply Management, the manufacturing index hit 49.5, up slightly from 48.2 in January. A reading under 50 signals that firms are cutting their business rather than expanding. Firms have cited a stronger dollar, falling oil prices, and weakening exports for the five-month stretch of contraction. However, economists tried to put a bow on the weak data by suggesting steady orders growth and rising inventory levels.

Meanwhile, manufacturing activity contracted in most of Asia and Europe, offering a blow to central planners and bankers who have been tweaking monetary policy in order to stimulate their economies and boost economic growth. China's PMI survey indicated the seventh consecutive monthly decline in February. The news comes a day after the People's Bank of China announced plans to slash its reserve capital ratio for banks.

Expect this data to weigh on the U.S. Federal Reserve's decision on whether to raise interest rates again this year. Although Fed Chairwoman Janet Yellen has suggested the central bank will increase rates gradually in 2016, recent speeches from other Fed members have suggested global economic turmoil and the struggles of financial markets will weigh on their decisions.