Most of the time, platinum costs about 30% more than gold. That's been the average for the past 40 years.

But every once in a while, that relationship gets distorted. When that happens, platinum surges powerfully, producing huge returns for investors who get in at the right time and stay the course through any volatility that comes our way over the next few months.

But... that distortion is unfolding now, so it's time to make a move to play platinum.

We won't get another chance like this for years...

Forces Lining Up Underneath Platinum

Make Money on the "Other Side" of Platinum

Miners, like Polymet Mining Corp. (NYSE: PLM) and Stillwater Mining Co. (NYSE: SWC), are facing steep production costs now, and they don't have the wherewithal to stand pat while this long-term trend plays out. This is one of Money Morning Global Credit Strategist Michael Lewitt's favorite short- to intermediate-term strategies.

Platinum is a precious metal, like gold, but there's a big difference: much more platinum is consumed, for a variety of reasons.

It's an investment; people buy platinum jewelry and coins to preserve their wealth.

But it has other, industrial applications, too. And thanks to some of its particular properties, its use in industry is considerable.

By far, its largest application - responsible for nearly 40% of demand - is in autocatalysts. By helping to speed up certain chemical reactions, platinum helps reduce pollution from vehicle exhausts and is employed in the refining of petroleum. The increasing use of fuel cells, which require more platinum, should see that portion grow larger over the next year and beyond.

Meanwhile, jewelry represents about 33% of demand, with other industrial uses at 22% and investment accounting for 5%.

But thanks to a beaten-down oil sector, platinum has lost some of its luster, pushing platinum prices to a point where it currently trades for a 23% discount to gold. That's very rare - an extreme outlier, in fact.

Looking at the platinum-to-gold ratio, we can easily see just how exceptional this is. 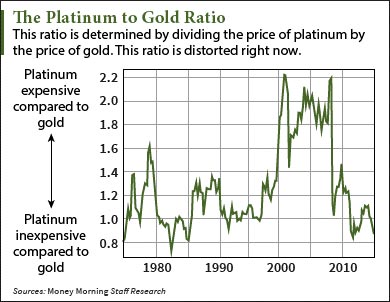 The last time platinum traded at a considerable price discount relative to gold was in 2012. Before that, it happened in 1982 and 1985. Coming out of those conditions, platinum tended to rally, sometimes massively, including returns over 50% in a little over a year.

This time around, it could be even better for investors who stick to their guns.

Thanks to extended low prices, a lot less platinum is likely to make its way to market this year. That will add up to a tightened supply.

That's great news for long-term investors, but not so great for platinum producers.

The World Platinum Investment Council (WPIC) reported back in August that platinum output from South Africa, the nation responsible for some 74% of mined supply, would likely fall by 600,000 ounces this year, a drop of 16% from 2015.

In fact, capital investment has fallen 63% since 2008, as platinum output has dropped. That's $1.5 billion of funds to operate that simply didn't get invested. In a few years, that lack of capital will manifest itself in severely challenged supplies when demand is forging ahead.

Other miners are also having a rough go.

In early December, Anglo American Plc. (OTCMKTS ADR: NGLOY), the world's largest producer of platinum, accounting for about 40% of global output, announced a radical restructuring. It's planning to cut jobs by more than half, a massive 85,000 fewer workers over the next few years from the current 135,000.

Anglo American expects to sell off some 60% of its mines to concentrate on its operations that will turn a profit in a scenario of even worse commodity prices. 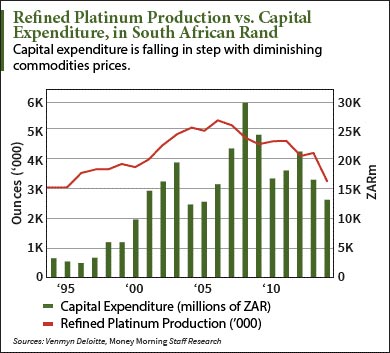 Even the experts can't manage to make heads or tails of this situation.

Industry leader Johnson Matthey Plc. (OTCMKTS ADR: JMPLY) is the specialist in the platinum group metals industry and the world's largest secondary refiner of precious metals. In the United States, for instance, Johnson Matthey is the leading manufacturer of platinum and palladium mill products for jewelry.

And still, they're having a hard time understanding the platinum market right now.

Platinum recycling has been falling and investment demand has surged, exacerbating a shortfall that's expected to repeat again this year for the fifth consecutive time.

Duncan also admitted that his group is surprised platinum prices have yet to respond to such strong demand and ongoing deficits.

This bolsters the case that platinum prices may already have bottomed.

Today platinum changes hands for about $927 per ounce. The last time prices were this low was in the depths of the 2008 financial crisis, nearly eight years ago.

Looking at the action in a platinum price chart suggests this precious metal's price may well have bottomed around $820 in late January, a full month after gold's possible bottom in mid-December at $1,050. 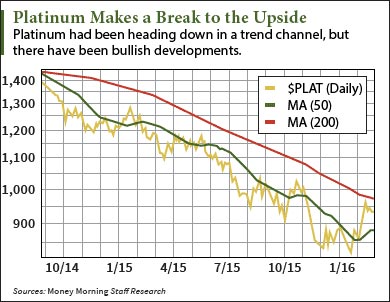 Platinum had been heading downward within a trend channel, but a couple of weeks ago broke out to the upside.

What's more, the 50-day moving average has clearly turned higher, and the platinum price surge has come on strong volume. This looks like the beginning of a positive trend, albeit one that may take some time to play out.

This action, combined with fundamentals pointing towards strong gains in the price of platinum, means it's time to look at investing in this precious metal for long-term gains.

The simplest way to accomplish this is to buy shares in the ETFS Physical Platinum Shares ETF (NYSE Arca: PPLT). It does a good job of tracking the price of platinum and is backed by physically allocated metal.

This exchange-traded fund (ETF) carries a reasonable annual expense ratio of 0.6% and currently has $392 million in assets.

Remember, the platinum-to-gold ratio is at a multi-decade low, and demand is surging while supply is shrinking, a rare combination unlikely to last much longer.

And that's a great recipe for considerably higher platinum prices.

Oil is another commodity in play right now. The distortions that have been keeping oil down are getting squeezed out of the market, and we're likely to see a "Great Oil Turnaround" in 2016. Click here to get Dr. Kent Moors' Oil & Energy Investor each week. You'll get all of Kent's oil recommendations, plus all of the other high-profit moves he's making in the wider energy sector. There's no charge for Money Morning Members, and you'll get his latest briefing on how to invest in the next revolution in energy.

What impact has the VW scandal had on platinum prices, if any?

SO – do I buy the metal or the call option? If the option – how far out?