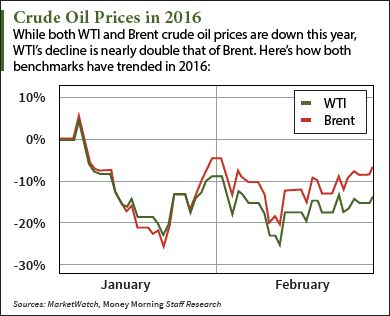 The Brent crude oil price was also moving higher this morning. The global benchmark – priced in London – added 1.1% to trade at $36.96 a barrel. Futures for May delivery fell 0.7% last month and are down 6.2% on the year.

Today's boost in the WTI crude oil price comes as several oil and gas producers announce plans to curb their production quotas in 2016.

According to The Wall Street Journal, some of the biggest U.S. producers said they will pull about 10% less oil from the ground this year than they did last year. These Midwest-based companies include Continental Resources Inc. (NYSE: CLR), Devon Energy Corp. (NYSE: DVN), and Marathon Oil Corp. (NYSE: MRO).

But the most significant firm joining the supply cuts is EOG Resources Inc. (NYSE: EOG), which analysts consider to be the most efficient driller in the United States. After reporting its first annual loss since spinning off of Enron over 10 years ago, EOG said last week it would only pump wells that provide at least a 30% return of oil supply. This is in addition to the spending cuts outlined in its Q4 earnings report, which will cut the company's annual production by about 5%.

This drop-off in oil wells will contribute to the dwindling number of operation rigs in the United States. Since the first week of 2015, the Baker Hughes Inc. (NYSE: BHI) rig count has fallen from 1,421 to 400. That's its lowest total in more than six years.

And Moors says this dwindling rig count will send the WTI crude oil price toward $70 a barrel by 2017. But that doesn't make every oil stock a buy. In fact, there are three categories of oil stocks that will offer handsome returns while the rest of the oil sector stabilizes…

According to Moors, you'll want to target companies using oil that's already been drilled. These are the oil stocks that will generate nice profits in the long term.

"Unlike earlier cycles, your returns won't be coming from a rise in aggregate oil production," Moors said on Feb. 29. "Rather, you're going to profit (at least initially) from the usage of supply already out of the ground. All of which points toward companies I am tracking for early indications of a bounce."

These three types of companies are…

The Bottom Line: With the WTI crude oil price continuing its winning streak today, the oil market is finally starting to stabilize. As several U.S. producers scale back production and the number of U.S. oil rigs continues to decline, oil prices will keep moving higher in 2016. In order to maximize your returns during this long-term rebound, we recommend investing in midstream MLPs, large U.S. refinery companies, and regional producers. These oil stocks will benefit the most from the price rebound.

The Shocking Forecast for Oil Prices in 2016… It's no surprise that oil prices took a nosedive last year. In fact, WTI crude fell nearly 40% in 2015. But there are a number of forces working together right now that will make prices more than double their current value. Here's our precise reading for oil prices in Q3, Q4, and beyond…