The Dow Jones Industrial Average gained just 34 points on a day when the index was mostly flat, leaving many traders to wonder why they even got out of bed today. The markets seemed to be largely in a holding pattern ahead of Friday's critical release of the February unemployment rate. Energy stocks were the most active as optimism for a deal between producer nations has investors expecting that oil prices will break the $40 mark before retreating again below $30. 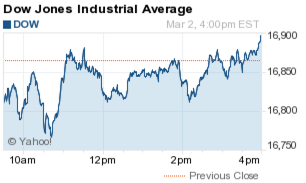 Oil prices closed at their highest level since Jan. 5 despite news U.S. crude inventories surged into the stratosphere and raised new concerns about where the nation will be able to store the commodity in the future. According to the U.S. Energy Information Administration, crude inventories increased by more than 10 million barrels last week and pushed storage up to 518 million barrels. Shares of Chevron Corp. (NYSE: CVX) were up 1.2% on the day.

Energy optimism popped on news that 15 producer nations are gearing up for a meeting to discuss a possible plan to freeze output levels. According to a statement from Venezuela's Oil Minister Eulogio Del Pino, the 15 nations will discuss an output freeze plan and possible further actions. Venezuela is one of the most oil-rich nations in the world, and it's currently experiencing electricity shortages. Ain't socialism grand?

But that's not even the biggest news story of the day…

This afternoon, the Fed's Beige Book indicated much broader economic activity across the United States; however, conditions were quite different depending on which region you analyze. Expect a spirited debate among members of the U.S. Federal Reserve during the central bank's policy meeting on March 15-16. Meanwhile, manufacturing activity has largely been flat due to a strong dollar, declining demand from abroad, and winter weather hang ups.

But the big news today was the death of former Chesapeake Energy Corp. (NYSE: CHK) CEO Aubrey McClendon, who had been charged yesterday by the federal government for allegedly violating antitrust laws. McClendon died in a car crash this afternoon. The news of his indictment had forced prominent Texas private equity giant Energy & Minerals Group (EMG) to "cease any and all new business activities" with McClendon, according to a report from Reuters. The U.S. Justice Department alleged that McClendon rigged the bidding process of oil and gas acreage during his time with Chesapeake and violated the Sherman Act. He was 56 years old.