We all know that liberal billionaire George Soros is a fervid fan of Hillary Clinton. The investor has contributed a sum of $6 million to Clinton's super PAC Priorities USA Action, according to campaign finance records released on Jan. 31.

We also know of Soros' distaste for fellow billionaire Donald Trump. In a December 2015 Guardian op-ed, Soros urged voters to disavow the GOP front-runner. And in a January 2016 interview with Bloomberg, the liberal mega-donor likened Trump's message to ISIS'.

But there's a twist to this tale.

You see, there is a Trump-Soros connection from the past that Soros isn't mentioning… 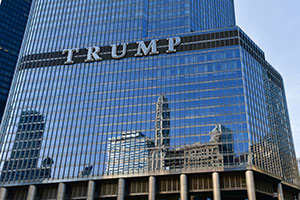 In 2004, George Soros made a $160 million loan to Donald Trump to build Trump Tower in Chicago.

The $160 million Soros investment came in the form of a so-called "mezzanine loan." (A mezzanine loan is like a second mortgage that charges a higher interest rate than the initial construction loan.)

Additionally, in 2008, Trump and Soros found themselves named co-defendants in a major lawsuit together…

The case involved real estate investment behemoth Leslie Dick Worldwide Ltd., which filed a RICO (Racketeer Influenced and Corrupt Organization) lawsuit against 17 parties, including Trump and Soros. Leslie Dick accused Soros, Trump, and Deutsche Bank AG (NYSE: DB), among others, of having concocted a scheme to win the 2003 auction for the General Motors Building in downtown Manhattan. Such scheming is known as "bid-rigging." And in fact, a bid-rigging scheme has just hit headlines again. Former Chesapeake Energy Corp. (NYSE: CHK) CEO Aubrey McClendon was indicted yesterday for the same — he's suspected of "conspiring to rig bids to buy oil and natural gas leases in northwest Oklahoma."

But back to Soros and Trump. On Jan. 6, 2009, U.S. District Judge Barbara Jones dismissed Leslie Dick's request for entry of a default judgment, ruling that Trump and the other defendants had already begun to actively litigate the case. Other than that, coverage of the suit has since been minimal and it remains unknown as to whether or not it's been resolved.

Donald Trump, however, likely has a reasonable explanation for his various dealings with Soros. As he has stated on many occasions, as a businessman he is oftentimes routinely forced to deal with individuals with whom he disagrees on certain points – even at Christmas parties.

What a Lower Yuan Means for Your Money: The Chinese yuan tumbled to a three-week low against the U.S. dollar and that's having a ripple effect throughout global markets. China's central bank cut reserve requirements for most major banks today in a move aimed at boosting growth in the world's second-largest economy. But will it work?

When it comes to Mekong millions, Soros will put politics aside. Soros is not a man of principals. Soros is a major threat to the security of our Nation!!!

But he’s still better than abortionist and communist democrats.

George Soros has a nephew
Is he the one spoken of that is
Married to the Clinton's daughter????!!!

no they are 2 separate people. Marc Mezvinsky is Chelsea's husband. Soros and Clinton families are friends.

I have no doubts that every American tries to find loop holes for their IRS returns. I was hoping you were to report that Trump was keeping his enemies close. Sounds like he was wheeling and dealing. I still think he will make the best President ever because he is, in fact, a business man who will go to any length to keep his word to the American people who elected him. I have often said that the CEO of Walmart should run this country because of his abilities to make a profit and please his customers. Well the same goes for President Trump. He has had a stellar year.