The oil stock Phillips 66 (NYSE: PSX) is the Money Morning Pick of the Week.

While the Phillips 66 brand dates back nearly 100 years, today's Phillips 66 is a relatively new entity, spun off from ConocoPhillips (NYSE: COP) in 2012.

Phillips 66 stock has held up surprisingly well over the past year despite plummeting oil prices - it's actually up about 6.5%.

Money Morning Chief Investment Strategist Keith Fitz-Gerald believes now is a great time to buy a well-run company like Phillips 66, while Wall Street is still down on oil stocks.

"When the time comes, I think the SEC filings will show that key players have been making large buys even as the investing public was told to steer clear of oil," Fitz-Gerald said.

Phillips 66: About the Company

hile the history of Phillips 66 has become entwined with that of ConocoPhillips because of their 2002 merger, the Phillips name traces its origins to 1917. In that year brothers Frank and L.E. Phillips founded the Phillips Petroleum Company in Bartlesville, Okla. While it started as an oil producer, the discovery of the Panhandle natural gas field in Texas in 1918 led to Phillips quickly branching out into natural gas.

The "Phillips 66" brand supposedly emerged from a 1927 road test of a new type of fuel on the famed Route 66, in which the test car reached a top speed of 66 miles per hour.

In World War II, Phillips developed a high-octane aviation fuel that helped power Allied aircraft. In the process of doing that, Phillips discovered another business - petrochemicals.

The last two decades, however, brought the biggest changes yet...

Phillips combined its chemical business with that of Chevron Corp. (NYSE: CVX) in 2000 to form a new company, the privately held Chevron Phillips Chemical Corp.

In 2002, weakened from a hostile takeover bid by billionaire T. Boone Pickens, Phillips merged with Conoco to create ConocoPhillips. The newly formed company was the sixth-largest publicly traded oil stock in the world.

When ConocoPhillips decided in 2012 to spin off its downstream and midstream assets, it tapped the old Phillips 66 brand in naming the new company. Today's Phillips 66 processes, transports, stores, and markets fuels and fuel products. It retains a 50% stake in the Chevron Phillips chemicals business. 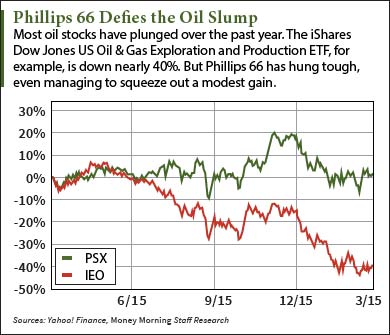 Most oil stocks have been hit hard over the past year. The iShares Dow Jones U.S. Oil & Gas Exploration and Production ETF (NYSE Arca: IEO), for example, is down 39% over the past year. But Phillips 66 stock is up more than 6.5% -- an impressive divergence from the oil stock pack.

And PSX stock has been hit with bad news twice in the past three months. In December Phillips stock fell 11.5% when Congress voted to lift the ban on crude oil exports. Then, when the company reported Q4 earnings on Jan. 29, investors disheartened by a 41.5% drop in profits from the same period a year earlier lopped about 10% from the Phillips stock price.

But Phillips is an oil stock that's hard to keep down. Since bottoming out Feb. 11, PSX is up more than 15%. No wonder it's attracted the attention of legendary investor Warren Buffett...

Why Phillips 66 Is an Oil Stock to Buy

Buffett started snapping up Phillips 66 stock in the middle of last year. He's continued to build his stake, buying more PSX stock in January and February. He now owns about 75.55 million shares, good for a 14.27% stake in the company. Phillips 66 stock is Buffett's sixth-largest holding.

"Warren Buffett has purchased more than $1 billion in Phillips 66 this year alone as oil sank to $26 a barrel. And that's in addition to the $5 billion he already owned at the tail end of last year," Fitz-Gerald said.

And Fitz-Gerald thinks he knows why he Oracle of Omaha likes PSX stock so much.

First, he says, it's time to start looking at oil stocks as an opportunity.

"Growth may slow, but it will not stop because oil remains relevant for huge portions of the planet, which means it's a 'must have.' And even if nobody digs up another barrel, the refiners and pipelines will still be making it and moving it."

"It doesn't drill for oil or natural gas, which means it's not as vulnerable to sustained low oil and gas prices as other oil companies are," he said. "And even though Q4 earnings dropped, it's beaten EPS for six consecutive quarters. Plus, it generates billions in cash from well-run operations every quarter."

Even those earnings numbers are somewhat deceptive. You see, the company has been using much of its cash flow from its refining business to finance growth in its chemicals and midstream business. This diversification will help insulate Phillips from some of the volatility in oil prices while adding to future revenue.

Even with recent gains, Phillips 66 stock is reasonably valued right now with a price/earnings ratio of 10.79. And while the one-year price target of $93.18 represents a gain of just 12% over the current price of about $83.41, that's shortchanging the long-term prospects for this company.

But PSX stock will pay investors to be patient. It has a dividend yield of 2.83%, and that's likely to rise. Since its formation in 2012, Phillips 66 has increased its dividend a startling 180%. Yet it still has lots of headroom - the payout ratio is a mere 28%. And that makes Phillips 66 stock a terrific play for income investors.

In Case You Missed It: Last week's Pick of the Week was a stock people use every day, often without thinking much about it. The stock itself has risen nearly 1,300% since its IPO. Lately, however, this tech giant has slumped a bit. That's OK, though. "I like it at this pullback price," said Money Morning Technical Trading Specialist D.R. Barton. "It's a legacy stock right now." Find out why you should own this company...