We've seen this time and again in the Age of Quantitative Easing: Stocks rally whenever central banks talk stimulus.

On the face of it, it's absurd that governments would direct the supposedly independent central banks, with the aim of boosting the stock market. That sounds like a conspiracy theory.

Unfortunately, that conspiracy happens to be true. They haven't tried very hard to hide it.

Of course that's not how it's "supposed" to be, but we all know it happens; we all know who funds central banks' money-printing sprees. And we all know that the trillions of dollars they create act like a tidal wave of cash that lifts share prices.

Take the gains that brings, by all means, but please don't have any illusions that these gains are even remotely healthy.

Rather, it's a sign of profound addiction. But that's not even the most worrisome thing in play here... 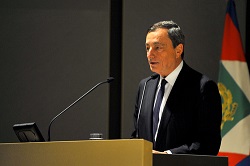 Worse, there are signs that not even QE can boost these markets much more.

The most recent central bank to openly hint at stimulus is, of course, Mario Draghi's European Central Bank.

In the middle of February, Draghi put stimulus back in the spotlight in a big way, when he said worries over China and the pace of growth in the Eurozone might compel the bank to extend its 1.1 trillion euro bond-buying spree, and even more euros might begin flooding the markets and the EU economy as early as this month, March 2016.

What happened next was as predictable as it is troubling...

Like you'd expect, the euro began to slide against the U.S. dollar just as soon as Draghi left the podium. That's not surprising; stimulus has a devaluing effect on currency.

But European stocks, the FTSE 100 in the United Kingdom (which is of course independent of the euro but strongly impacted by it nonetheless), the CAC 40 in France, and the DAX in Germany, barely moved at all, rather less than 1% across the board, either way.

That's not at all what investors have been "trained" to expect from this market. Draghi's nod to more stimulus should have sent European shares to the moon, but the fact that the reaction was so muted is telling.

The reaction says everything really...

From this reaction, we can see the true nature of this kind of stimulus: It's like a drug.

Markets got loaded on the good times as the initial rounds of easing played out in the United States in 2008 and Europe in 2009. The party was one of the longest (yet least-trusted) bull markets in history.

But... like any drug addict, markets need more and more of the drug to feel the effects of the high for the same length of time. From here on out, any kind of rally that happens on news of more easing, be it in the United States, UK, or European Union, should be viewed as liable to pull back almost as quickly.

In fact, for the time being, most rallies in this market should be looked at with a healthy degree of skepticism. Like I said, take the gains, but do so with your eyes open.

These rallies and their accompanying pullbacks are likely to be violent - remember, 19 of the 20 single biggest "up" days in the market over the past 25 years have all come during bear or "down" markets.

Now, it is possible to make money - good money - in this market; options tend to be great for this. My Stealth Profits Trader readers have made five triple-digit gains since the new year, whereas the Dow Jones Industrial Average has lost more than 3.3%.

But this is a market for trading, not investing. The best approach is to move quickly on confirmation of the short-term momentum of a stock (my Stealth Stock Trading Indicator is a great tool for determining this), with a sound, well-defined exit strategy and trailing stops in place.

I think we can expect this "traders' market" to continue until the world goes "cold turkey" on stimulus and starts to look - like we used to - at strong fundamentals as the reason to buy.

It's going to be hard for a generation hooked on low interest rates and easy money, but the result is the same as it would be for anyone kicking a bad habit. The reward is a stronger overall stock market and a healthier economy.

Until that happens, I'm expecting the market to trade sideways or down amid these "bounces" for at least the next three to six months.

I would really like to believe what you are saying is true. However, in the face of all the bad news, negative interest rates, collapsing commodity prices, China, blah blah blah blah… The markets keep rising. Oh resistance, at 1950 on the S & P, no wait 1980, well maybe 2020, it is all nonsense. I subscribe to 6 other so called stock pickers websites, all with the same results. Stimulus this stimulus that, it's a bear market rally, no wait ECB, PBOC. Even some of the comments on this website regarding European banks have proven to be completely upside down. My offer for your stealth profits trader is $1. If it proves to better, I will gladly be a lifetime subscriber.

Almost none of these guys forecast correctly. It's like a medium or fortune teller predicting the future. Sometimes, eventually, the prediction comes true, just like a broken clock is correct twice a day. Then the forecaster boasts that he or she had it right all along, when it was just luck.

Two Nobel Prize winners in Economics proved that Government printing causes bubbles that burst and that lower tax rate are the real key to boosting the economy. Both President Kennedy and Reagan followed their advice and history proved them correct. The Nobel Prize economists were Ludwig Von Mises and Frederick Hayek.