The Netflix stock price is up more than 7.6% to $97.78 in the last month as markets have stabilized and stocks have rallied. That outpaces gains of 3.3% and 4.2% for the Dow Jones and Nasdaq in the same time.

Despite the rally, the Netflix Inc. (Nasdaq: NFLX) stock price is down 15.16% year to date, and NFLX continues to be one of the most volatile stocks on the market. That's why we have a very specific recommendation on how to profit from Netflix stock.

But before we get to that, here's what has boosted the Netflix stock price this month… 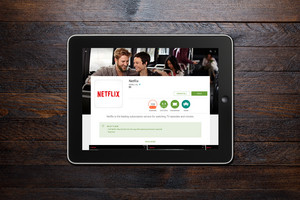 Monday, the streaming media giant announced it's teaming up with Instagram to hire what they call "Grammasters." Grammasters are people who will travel to Europe and the Middle East to photograph the sets of popular Netflix original shows and movies. Netflix will cover all the travel arrangements and pay Grammasters $4,000 for the two-week gigs.

Interested individuals can apply by Instagramming their three top photos with the hashtag #Grammasters3 by March 6. Twenty-five finalists will be selected by March 11. Lucky ones will then have to complete some paperwork and get vetted via Skype.

Original content like "House of Cards," "Orange is the New Black," and "Fuller House" is what continues to draw subscribers to Netflix and drive shares.

Netflix added 5.59 million total net subscribers in Q4, up from 4.33 million additions in the previous year. The company had 4.04 million net subscriber additions outside of the United States. That topped expectations for 3.51 million. It was also better than the 2.43 million it added in the prior-year period.

And that international user growth is expected to continue…

Since Netflix stock is such a momentum play, we have a very specific recommendation for how to play the moving Netflix stock price. Here's what investors need to know now…

How to Play the Volatile Netflix Stock Price in 2016

Things are different this year amid worries of a stock market crash and soft corporate results.

Over the past 22 quarters, Netflix has trumped earnings expectations all but once. The stock's reaction, however, hasn't been consistent. Shares have moved up or down at least 10% on more than half of those occasions.

That's why we don't recommend buying Netflix stock for the short term. The stock is just too volatile for short-term retail investors. And the volatility of the broader markets will only make it even more volatile this quarter.

But, if you can hang in and go through any volatility, you can profit from Netflix stock long term, according to Money Morning Defense & Tech Specialist Michael A. Robinson.

"Right now, they are going through an Amazon.com Inc. (Nasdaq: AMZN) style growth period. It's the Bezos model – build, build, build – then the profits will follow," Robinson said after Netflix's Q3 2015 earnings report.

Netflix is the dominant online player in the media space and it continues to increase its presence. New content and original series, meanwhile, keep subscribers hooked. The company is making money and profits are rising.