After all the cheerleading about the February jobs report, the markets ended relatively flat on the day, with the Nasdaq ticking into negative territory over the last hour of trading. Even though energy and materials stocks rallied, the telecom sector weighed down the Dow Jones Industrial Average. Investors are now turning their attention to the upcoming FOMC meeting and wondering how the U.S. Federal Reserve will interpret today's data set. 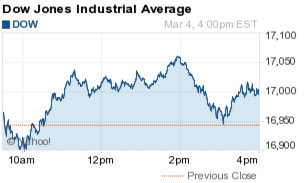 The U.S. economy is on a tear, according to the "official numbers" released by the U.S. Labor Department this morning. The unemployment rate hit 4.9% after the nation added 242,000 jobs. But despite the rosy figures, don't expect the Federal Reserve to simply jump in and hike rates. That's because both worker hours and wages declined, two figures that remain frustrating to the central bank in its quest to meet its annual inflation target. According to CME FedWatch, there is a 61.9% probability the central bank increases interest rates at some point in 2016.

And the White House was rapturous over the news…

Even though the U-6 unemployment rate still hovers near 9.7% and wages contracted, the White House took a victory lap on the economy today. President Obama said the U.S. labor market was the envy of the world and said the country is "pretty darn great right now." Do you agree? Sound off in the comments section below…

Oil prices finished the week strongly, with WTI crude gaining 9.6% on the week. Crude oil prices rallied to their highest level in over a month – thanks to some bullish comments from the International Energy Agency (IEA). Here's exactly what the IEA said that boosted the price of crude oil…

But the big talk today centered on news that the Government Accountability Office is going to investigate whether the Federal Reserve and other regulatory bodies are "too soft" in terms of policing U.S. banks. The decision came after two Congressional Democrats requested the increased scrutiny on behalf of American taxpayers. Congresswoman Maxine Waters of the House Financial Services Committee and Congressman Al Green of the Subcommittee on Oversight are determined to discover whether government officials are locked down by "regulatory capture" and thus provide preferential treatment to the banks they supervise.