U.S. oil prices closed at a year-to-date high of $37.90 today, pulling energy stocks, material stocks, and the Dow Jones Industrial Average higher. Crude prices have been extremely volatile over the last year, but the latest round of market speculation is that OPEC and several non-cartel nations are looking for a price floor of roughly $50 per barrel. They could be in for a surprise, however, if daily U.S. shale production – which is poised to fall by more than 100,000 barrels in April – gets another boost and reignites concerns about a global glut in supply. But that's not the only thing that happened today… 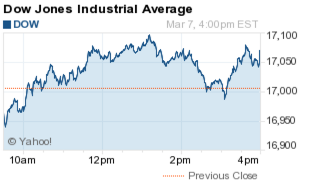 Shares of Apple Inc. (Nasdaq: AAPL) dipped 1.1% on news its customers were the subject of a cyberattack over the weekend. Reports indicate this is the first attack on Macintosh computers using "ransomware" software, according to research from cyber firm Palo Alto Networks Inc. (NYSE: PANW). Ransomware encrypts data on infected machines and then demands that users pay ransoms in digital currencies so they can obtain a key to unlock their data. AAPL's downturn weighed on the Nasdaq, which declined eight points on the day.

The big talk today centered on oil prices, which hit a new 2016 high. WTI crude prices ticked up to $37.90 per barrel, while Brent crude settled at $40.84 per barrel. The rally came after the United Arab Emirates' energy minister announced crude prices are set to see a correction by the end of the year. The correction is expected to come as more global producers are forced to freeze output. Here are the three types of oil companies that will yield profits from the "Great Oil Turnaround" of 2016…