The private equity industry is under serious pressure right now.

With the Super Crash on the way, financial stocks are taking a beating – particularly private equity stocks like Apollo Global Management LLC (NYSE: APO), Ares Management LP (NYSE: ARES), KKR & Co. LP (NYSE: KKR), Blackstone Group LP (NYSE: BX), The Carlyle Group LP (Nasdaq: CG), and Fortress Investment Group LLC (NYSE: FIG). The thing all of these companies have in common is heavy exposure to the high debt levels that have built up since the financial crisis. The market is telling us that it is very worried that the Debt Supercycle is over and that a lot of this debt isn't going to be paid back.

But the private equity meltdown also pinpoints something very important.

It tells you the exact stage this credit cycle has reached – if you know where to look.

Private equity firms serve as a startlingly accurate credit barometer. The less productive their behavior, the more likely the cycle is reaching its late stages.

When credit is mispriced, the credit cycle is far advanced, and debt investors should be running in the other direction from bond and loan offerings involving private equity‐owned borrowers… because private equity firms are doing two destructive things.

And that's what we saw up until the end of 2014 when the music in the credit markets stopped.

Here's what to watch for… 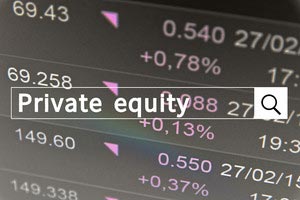 The first "private equity indicator" I watch for is an increase in the frequency of "dividend deals."

Also known as a "dividend recapitalization," this infamous transaction involves a private equity‐owned firm borrowing money to pay a dividend distribution to its owners. We've seen this behavior all over the news lately – KKR-backed GenesisCare seeking $285 million in loans, American Tire Distributors acquiring $805 million in junk bonds to pay dividends to TPG Capital, JCrew borrowing $500 million to cash out its shareholders, and Vogue International LLC borrowing over $200 million to pay a shareholders' dividend to The Carlyle Group.

The debt raised in these transactions is not used to enhance the business of the borrower in any way, for example, by building additional facilities, funding research and development, creating new products, or hiring new workers. The money instead is paid out to the private equity sponsor in order to reduce the capital it originally invested in the business. It saddles companies with more debt while reducing or eliminating any skin that the private equity firm has in the game – leaving bondholders holding the bag.

This practice is contrary to the raison d'être of private equity, which is supposed to be based on overcoming the conflicts of interest that arise when the owners and management of the company have only a small ownership stake in the enterprise. While the private equity firm generally maintains a significant ownership position after a dividend transaction, the amount of money it has at risk in the business is significantly reduced if not eliminated.

Dividend transactions are particularly noxious to the health of lenders, who are left lending money to a company whose owners are in possession of a free "call option" on any appreciation in the value of the business but are also in a position to walk away without losing money if the business begins to falter under the weight of its new debt. The only potential limitation on these dividend deals is the law governing fraudulent transfers (i.e. bankruptcy laws that prohibit transactions that defraud creditors), but these are relatively easily avoided.

Without fail, these unproductive transactions start increasing in frequency and size when the credit cycle is reaching its breaking point.

This second practice that indicates that the credit cycle is entering its terminal stages is the phenomenon of private equity‐owned companies being sold by one buyout firm to another, which I call "passing the hot potato."

Some firms, like Simmons Company (the mattress manufacturer) or General Nutrition Companies, have been sold numerous times between buyout firms. Simmons Company, in fact, is a company that fell into bankruptcy after paying a large dividend to one of its private equity owners during the course of being bought and sold seven different times by buyout firms over a period of two decades.

These are, of course, not "real" transactions in any sense of the word – they are cooked up for the benefit of the participating private equity firms.

The real reason such deals are done, of course, is to generate fees for private equity firms. The selling firm is able to generate a "realization event" that triggers a "transaction" fee and allows it to return capital to investors, while the buying firm is able to pay itself a transaction fee on the purchase. The wonder is that lenders continue to finance such transactions, which are done at higher and higher multiples of cash flow and contribute little to economic growth.

The question investors and lenders should be asking when they see such deals is why no strategic buyer is interested in buying these companies at a higher price than another private equity firm.

And the answer to that question is the reason why investors should avoid lending to these companies and asking private equity firms why they can't find something better to buy than somebody else's used merchandise.

Private equity firms have mastered the art of enriching themselves at the expense of virtually everybody else with whom they come into contact in the economy. The primary economic act that a leveraged buyout or leveraged recapitalization (which is really just a partial leveraged buyout) accomplishes is to substitute debt for equity on a company's balance sheet. It rarely creates new products. It rarely builds new plants. It rarely funds new research and development. And it rarely leads to the creation of new jobs or new industries. Every aspect of corporate existence is sublimated to the need to service the company's debt.

And when you see this happening with a greater and greater frequency – as we do now – it is a signal that we are reaching saturation point and the credit cycle is coming to an end.