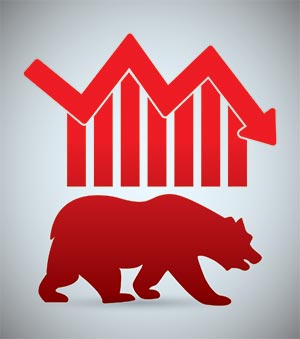 During a four-day rally last week, the Dow Jones Industrial Average climbed 490 points. And that was just the most recent surge in the index's 1,200-point recovery since its dismal start in early January.

While the signs of a rebound were encouraging, Money Morning experts say "bear market 2016" isn't close to being over.

Over his 29-year career in financial services, Lewitt has managed billions of dollars for his institutional and high-net-worth clients. He is widely regarded as the No. 1 credit strategist working today.

And there's one major reason Lewitt thinks U.S. stocks will be continue to be suppressed in 2016.

But before we get to that, here is what caused the latest four-day rally.

The Dow gained 490 points last week for its third consecutive, weekly net gain. Oil prices, which have caused numerous market dips and rallies this year, were the main catalyst behind the jump in stock prices. WTI crude prices shot up 9.8% from $32.8 a barrel to $36 a barrel last week.  That gave investors a glimmer of hope the global energy rut might be ending.

Markets also got a boost from the latest jobs report, which beat economists' expectations. The U.S. economy logged 240,000 new jobs, compared to analyst median consensus estimates of 190,000. Earlier in the week, manufacturing data was also moderately better than expected. The Institute for Supply Management reported its index of national factory activity increased 1.3 percentage points to 49.5% in February, according to Reuters. That's compared to an only 0.2 percentage point increase in January to 48.2%.

These developments may have been enough for a temporary spike in stock prices, but Lewitt urges caution for long-term investors.

"Investors should count their good luck and use higher prices as an opportunity to reduce equity exposure or hedge stocks they don't want to sell," Lewitt said.

Back in February, Lewitt warned investors they were facing a bear market for 2016. That was when 50% of S&P 500 companies were down more than 20% from their 52-week highs. And while some of those stocks have recovered, it's not all smooth sailing...

In fact, he sees one major reason bear market 2016 is only going to get worse...

The One Big Reason Bear Market 2016 Will Worsen

The U.S. Federal Reserve is looking for any excuse to raise interest rates, so it can lower them again when another financial crisis strikes.

With unemployment at 4.9% and inflation creeping up toward the Fed's 2% target, the Fed has its excuses. And that's what Lewitt finds disturbing.

Having engineered our last six-year bull market run, the Fed is also capable of engineering the opposite - a painful, drawn-out bear market.

We saw what happened shortly after the Fed raised rates - a mere 0.25% - in December. The Dow had its worst 10-day calendar start in history this year.

According to Lewitt, higher rates would further appreciate the dollar and put downward pressure on oil prices and corporate earnings in the United States. These are the last things the market needs right now.

Weak markets give the Fed an excuse to hold off raising rates, but raising them under current economic conditions will only make the markets weaker.

"In other words," Lewitt said, "the good news that investors celebrated last week could very quickly turn into bad news."

Lewitt doesn't believe the U.S. economy is strong enough to warrant a rate increase anytime soon. But because the Fed relies on spurious indicators like unemployment and inflation, Lewitt believes the odds of a June rate hike are increasing.

"And if investors are wrong and the economy is not all that strong (which is what I believe)," Lewitt said, "they are jumping the gun. Either way, stocks look very risky here, and investors should proceed accordingly."

With stocks posing so much risk, many investors are seeking refuge in commodities like gold and silver. Both precious metals are the best "crisis insurance" for your portfolio. Our experts put together the ultimate guide that tells you everything about the best stores of value in history. Check it out, right here...