Thanks a lot, China, for ruining Wall Street's longest daily win streak since October. The Dow Jones Industrial Average ran out of gas after Beijing released its worst exports report since the height of the 2008-2009 financial crisis that saw global trade plummet. Markets are expecting the People's Bank of China will again join the European Central Bank in its ruthless pursuit of creating any growth through desperate monetary policy measures. 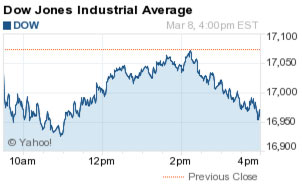 Here's what you might have missed in the markets for Tuesday, March 8, 2016.

In political news, it's another busy day for voters in primary season with Hawaii, Idaho, Michigan, and Mississippi in focus. The biggest prize for Republican and Democratic politicians will be Michigan. The busy primary day comes as former New York City mayor and technology billionaire Michael Bloomberg announced he will not seek an independent bid on concerns that his candidacy would lead to Congress deciding the election.

The economic calendar was extremely quiet today, with U.S. Federal Reserve members going into hiding during the blackout period leading up to next week's FOMC policy meeting. Today's biggest domestic report was small-business owner sentiment, which fell last month to its lowest level in two years. A survey of 5,000 business owners raised concerns about shrinking margins, falling confidence in the economy, and concerns about the political landscape.

The big talk today centered on weak Chinese trade data. Exports fell for the eighth consecutive month, renewing concerns about stagnating growth in the global economy. Exports fell 25.4% in February, well worse than the 15% decline that economists had anticipated. But it wasn't just exports that slowed. Last month, China's demand for imports fell 13.8% on an annual basis, news that dramatically impacts the economies of countries like Australia and New Zealand, which count the world's second-largest economy as their top customer.

With today's losses, investors are wondering if we're heading for a stock market crash, correction, or bear market. Here's what our Money Morning experts predict will happen in 2016…

looking forward to the fresh information about these exciting opportunities.