The price of Bitcoin took a tumble over the past week as concerns about a lingering issue again became too obvious to ignore.

The Bitcoin price fell about 9% in the five days following Feb. 29, when delayed Bitcoin transactions revived fears that its network had reached capacity. 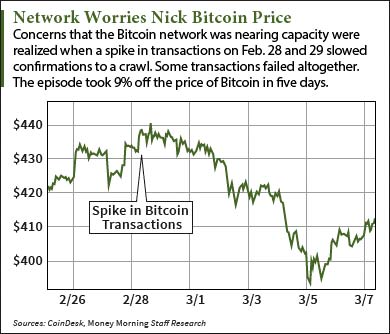 This most recent drop in the price of Bitcoin echoed the one in January, when the digital currency fell as much as 16%.

A prominent Bitcoin developer, Mike Hearn, triggered that drop with a scathing blog post that claimed Bitcoin had "failed" because the top developers had not resolved the network capacity issue. Adding to the drama, Hearn also announced he was abandoning Bitcoin.

Network capacity is a problem for Bitcoin because as it stands, the system isn't able to absorb the rising number of transactions. The only mechanism available is attaching a fee to the transaction.

But even that doesn't always guarantee a transaction will go through.

Here's what happened last week to highlight this issue...

How Transaction Snags Dropped the Price of Bitcoin

A week ago the number of transactions spiked, possibly by a person or group wishing to prove the Bitcoin network's vulnerability.

If that was the intention, it succeeded. The overload of transactions started to cause major delays. Average transaction times stretched from 10 minutes to beyond 40 minutes. Some failed to go through at all.

That kind of chaos on the Bitcoin network spooked a lot of users, causing the price of Bitcoin to sink.

Over the weekend, the Bitcoin price stabilized at just over $400; the price of Bitcoin today has been hovering around $410.

And while the number of transactions has eased, the problem remains. But a solution is needed soon if the digital currency is to realize its full potential.

You see, the system functions by assembling transactions into "blocks" that get verified by other computers on the network. A block is created about every 10 minutes and cannot be larger than 1 megabyte.

The 1 megabyte limit was no problem for a while. But Bitcoin's rising popularity has pushed the network to its limits.

The exasperating thing is that last week's network hiccup didn't have to happen. You won't believe why it did...

Why This Threat to the Bitcoin Price Hasn't Been Resolved

One of Bitcoin's strengths is that it's decentralized. Software, not a government or central bank, controls the digital currency.

But that also means no one is really in charge of Bitcoin. A small number of developers have access to the code, but they don't always agree. And in the case of the network capacity issue, they don't.

One small faction believes doing nothing is best. In their view, the competition for space on the blocks will drive up the transaction fees, ensuring the future participation of the miners needed to verify the transactions. But that means Bitcoin transactions will eventually cost more than transactions by other means, limiting its usefulness.

At least two groups have written Bitcoin software that would allow for 2 megabyte blocks, Bitcoin XT and Bitcoin Classic. A third option, Bitcoin Unlimited, would dynamically increase the block size based on network consensus.

Users can "vote" on these options by downloading and using the freely available software. Right now, about 70% of the Bitcoin "nodes" are still using the original software, Bitcoin Core. The Bitcoin XT option has about 2.38% and the Bitcoin Unlimited just 1.17%. But Bitcoin Classic is up to nearly 25%.

However, none of these options can displace Bitcoin Core unless at least 75% of the nodes are using it.

One more solution involves creating more room on each block by moving some data out and storing it elsewhere. This change could be made to the Bitcoin Core software most nodes are using now.

Any of these options would do in the short run. Unfortunately, a combination of stubbornness, outsized egos, and a desire to craft a "perfect" solution has deadlocked the process.

The debate over what to do already has dragged on for nearly a year. And the longer we go without a solution, the more likely we are to see more disruptions to the Bitcoin network - and subsequent damage to the price of Bitcoin.

The Bitcoin price has proven to be resilient to these shocks so far, but sustained trouble within the network could change that.

At some point, logic dictates that the key players in the Bitcoin community will agree on a solution. Everyone involved with Bitcoin has a lot to lose - the cumulative value of all existing Bitcoins is $6.29 billion, and more than $1 billion in venture capital has been poured into Bitcoin startups.

The Bottom Line: The price of Bitcoin fell last week after a spike in transactions taxed the limits of the Bitcoin network. The incident showed that a long-running debate on how to increase those limits needs to be resolved soon. Since several ready-to-go solutions are available, only stubbornness is preventing a resolution. With billions of dollars in value at stake, the Bitcoin community has a very strong incentive to get this issue fixed before it does any more damage.

The True Potential of Bitcoin: Earlier this year, I sat down with Money Morning Executive Editor Bill Patalon to discuss why Bitcoin matters and what's likely to happen this year and beyond. This is a comprehensive assessment of Bitcoin in 2016 that  you can't afford to pass by...