The Dow Jones Industrial Average's third-longest bull market turned seven years old today as the markets prepare for European Central Bank Mario Draghi to expand stimulus efforts to unprecedented levels in order to recharge the bloc's economy. No one has warned him that doing so will damage the euro's value, continue a global race to the bottom for central banks, and just lead right back to where they started once the money faucet goes dry. That said, it doesn't mean we can't make money on Draghi's ill-sighted will. You can get started, right here.

Here's what you might have missed in the markets for Wednesday, March 9, 2016. 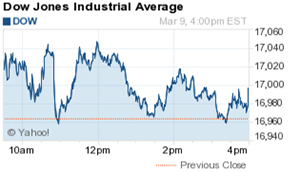 The Consumer Financial Protection Bureau asked for borrowers from peer-lending sites like LendingClub Corp. (NYSE: LC) to alert the federal agency of any complaints. The announcement is largely expected to prelude additional regulatory oversight by the federal consumer watchdog. The agency is also targeting private loan lenders on concerns that some "bad actors" are discharging loans prematurely, a decision that could quickly lead to default and ruin a consumer's credit or ability to buy a house.

The big talk today centered on oil prices – and the impact of the low price environment on global producers. Crude prices rallied to another 2016 high after the U.S. Energy Information Administration reported a strong drawdown of gasoline inventories in the United States and traders grew increasingly more optimistic about a possible deal between global producers to freeze output levels. According to various reports, OPEC and non-OPEC nations will meet in Moscow to discuss a deal this month.

That deal was highlighted by big news about the weakening financial condition of OPEC's largest oil producer. According to Reuters, Saudi Arabia has its hand out in search of a bank loan worth between $6 billion and $8 billion. The nation will need to rely on foreign borrowing in order to shore up its financial coffers.

Despite strong fourth-quarter and full-year earnings, Facebook stock has largely remained flat in 2016. This has many investors thinking shares have plateaued near $100. But there are three reasons why the Facebook stock price will climb another 133% in just four years…