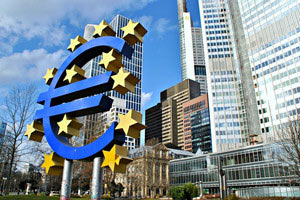 Nothing screams "insanity" more than the ongoing actions of central banks around the world as centralized planners attempt to spur economic growth. Instead of badly needed structural reforms, central bankers are implementing negative interest rates, outlandish stimulus programs, cutting safety regulations on banking requirements, and - of course - arguing that if we just keep doing the same thing, eventually we'll spend our way into prosperity.

This week's "Ostrich with His Head in the Sand Award" goes to European Central Bank President Mario Draghi, who headlines a meeting of the continental bloc's central bank tomorrow. Markets are expecting an array of different and dizzying policy decisions. That list could include a combination of an expansion of its already overzealous quantitative easing program, the introduction of a two-tiered deposit system, cheaper loans to banks, deeper cuts to interest rates, and possibly something as illogical as banning high-denomination currency.

Here's how to profit from the "mother of all" stimulus plans...

Okay, let's take a breather and tackle your top Dow Jones Industrial Average news, stocks to watch, and economic calendar for Wednesday, March 9, 2016 - a day that marks the seventh anniversary of the current bull market.

Futures for the Dow Jones Industrial Average today forecast a 99-point gain as oil prices pushed higher. The uptick comes after the index slipped for the first time in five sessions yesterday.

Here's a breakdown of why the Dow Jones is moving higher this morning.

Despite strong fourth-quarter and full-year earnings, Facebook stock has largely remained flat in 2016. This has many investors thinking shares have plateaued near $100. But there are three reasons why the Facebook stock price will climb another 133% in just four years...