With the European Central Bank pulling out the biggest bazooka yet in terms of monetary policy, the Dow Jones Industrial Average was expected to resume its sugar high. But it turns out the ECB will walk away from any further rate cuts, meaning that Uncle Sugar is making his attempt at spurring economic growth on the back of savers. That means, when this round of stimulus doesn't work in the long run – just like the last few rounds have failed to provide the desired results – the ECB will have to make a decision…

The central bank – like many others – will need to either admit it's time to engage in badly needed structural reform, or they will turn to another form of stimulus, such as direct injections of cash into an economy through Keynesian experiments like infrastructure spending. Expect the latter… and prepare to profit off the next misadventure in centralized planning by investing in this ETF. 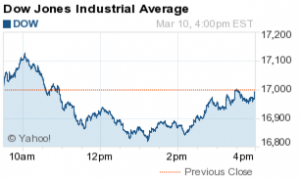 Check out the results for the Dow Jones, S&P 500, and Nasdaq:

First up, oil prices were down as traders can't decide whether oversupply concerns are more important in the short term than recent data indicating a rise in demand. The ECB's massive stimulus plan didn't really move the needle for energy commodities, but concerns about Iran's participation in an OPEC production freeze does worry many about the impact on prices. WTI prices slipped 1.2% to $37.84, while Brent crude fell 2.5% to $40.05.

On the economic front, weekly jobless claims hit a five-month low, according to the U.S. Labor Department. The ongoing decline in jobless claims and last week's strong jobs report would provide the U.S. Federal Reserve with further ammunition to increase interest rates next week.

But the big talk today was about Mario Draghi and the European Central Bank's decision to test the stability and sanity of the global financial sector. The ECB slashed interest rates to zero, increased its already massive asset-buying plan by 33% each month, moved the deposit rate down another 33%, and punished anyone who isn't now stashing their money in the walls or mattress. But the markets didn't like the news that the central bank is done with rate hikes. It also didn't like how the ECB failed to introduce a two-tiered banking system that would encourage lending and punish banks for holding too much capital.

Oil prices have suffered one of the worst crashes in modern history. But WTI prices have rebounded by nearly 30% over the last month, and there's one reason why they'll keep going higher in 2016 and beyond…