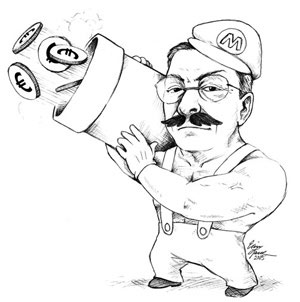 Part of this package is another ECB interest rate cut that will affect U.S. stocks. The cut will hurt some U.S. companies and help others.

But before we get to that, let's look at what Draghi's stimulus package entails.

In what seems like a last-ditch effort to revive the Eurozone economy, Draghi cut the ECB interest rate to 0% from 0.05%. He also expanded the ECB's quantitative easing program from €60 billion to €80 billion ($67 billion to nearly $90 billion) a month. Both monetary policy efforts are supposed to incentivize banks to lend and stimulate economic growth.

In addition, Draghi cut the bank deposit rate even deeper from -0.3% to -0.4%. Negative interest rates are supposed to encourage banks to lend even more by penalizing them for hoarding cash at the central banks. But this rarely works as it was intended. 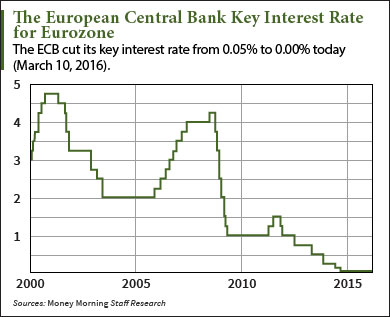 The FTSE 100 spiked sharply after Draghi's stimulus announcement, but pared its early gains and sank 109 points to 6,036.70 at market close. The euro also fell about 1% against the U.S. dollar on the news, but then recovered after it jumped to $1.11.

Draghi's previous stimulus measures he announced three months ago failed to boost inflation and economic growth, according to the BBC. Draghi's newest stimulus package went beyond what the market was expecting.

Draghi seems intent on pursuing the same type of controversial monetary policies that have failed consistently in the past. (Remember that Albert Einstein is credited with once saying, "The definition of insanity is doing the same thing over and over again, but expecting different results.")

It's unclear what effect this will have on the Eurozone in the long term. What's clearer is how the ECB interest rate cut will affect U.S. stocks.

Let's look at that now…

The first factor to look at when evaluating what the ECB interest rate cut will do to U.S. company shares is to consider how it affects the U.S. dollar.

In the long run, the ECB interest rate cut will weaken the demand for the euro by spurring inflation. As a result, the value of the euro is also weakened. That makes the U.S. dollar appreciate against the euro.

A stronger dollar reduces the demand for U.S. goods and services in the Eurozone by making them more expensive. That deals a big blow to the profit of many U.S. exporters – over 40% of the earnings from S&P 500 companies come from abroad.

Also, most U.S. companies that export are paid in foreign currencies. When these companies take home revenue from the Eurozone, they get nailed with smaller profit margins when converting it back to the dollar.

Over the long run, U.S. companies that do a lot of business in the Eurozone could face lower profits, which could translate to lower quarterly earnings, less growth, and job cuts. And that doesn't make investors happy.

But U.S. companies without that exposure could enjoy a boost in share price as money from Europe pours into U.S. markets. Negative interest rates overseas will drive out people looking to make money on their money. European deposit holders will also look to buy U.S. Treasuries in addition to stocks.