It was a big week for the gold price, which managed to achieve not one, but two major milestones.

The first was its official return to a bull market, and the second was reaching its highest levels in more than 12 months.
That of course has caused considerably more attention to be paid to gold lately. But it's gold's recent breathtaking action that should cause investors to exercise caution in the very near term.

Gold's bull market looks like it's made a convincing return, yet the recent surge just may be about to take a well-deserved break.

What the Gold Price Did This Week 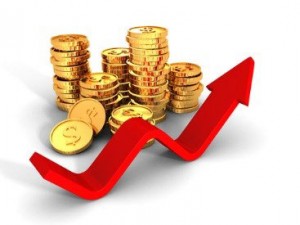 First, let's take a look at what the gold price has done in the past few trading sessions.

But yesterday (Thursday) saw the gold price jump as the European Central Bank announced it was cutting its main interest rate from 0.05% to 0% and cutting its bank deposit rate from -0.3% to -0.4%. As well, the bank said it would expand its QE program from €60 billion to €80 billion monthly.

Where the Gold Price Goes from Here

Buying momentum has returned to the gold market. In fact, thanks to the strong upward move since December, gold is now officially in a bull market. That's defined as a 20% rally from a recent low – and that's exactly where we are.

There's been so much demand for the precious metal that assets in the SPDR Gold Trust ETF (NYSE Arca: GLD) have ballooned from nearly $20 billion to about $30 billion; a 50% increase in just two short months.

As well, the iShares Gold Trust (NYSE Arca: IAU) actually ran out of shares due to a surge in demand. Since IAU is considered an exchange-traded commodity subject to different rules, an issuance of new shares requires U.S. Securities and Exchange Commission approval. So essentially, the trust's management was overwhelmed by the demand tsunami.

That's because it was the best month ever for the PHLX Gold/Silver Index (XAU) since its inception way back in 1984.

Contributing further to gold's latest gains has been the weakening U.S. dollar. A quick look at a recent chart of the U.S. Dollar Index (DXY) illustrates this point effectively. 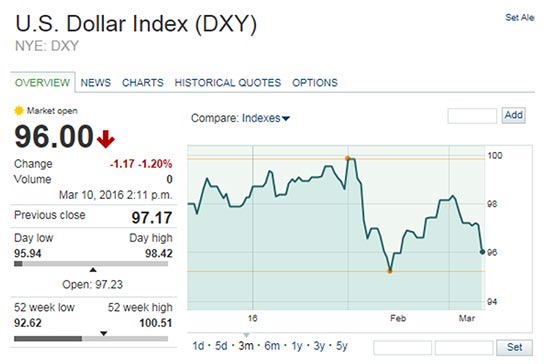 After attempting a third breakout at 100 back in early February, the DXY has continued to weaken, helping to support a higher gold price.

There's been so much relentless and consistent strength in gold since December, and gold stocks since late January, it's hard not to imagine that we're due to hit a soft patch shortly.

My view is gold and gold shares will likely give up some ground in the next few weeks before they return to bull mode. And that may be an attractive opportunity to take a position in this sector.

Stay informed on what's going on with the price of gold today and all days by following us on Twitter @moneymorning or liking us on Facebook.