As a micro cap with a valuation of just $166 million, CWCO stock is a more speculative play than our usual Pick of the Week.

But Consolidated Water stock also taps into one of what Money Morning Chief Investment Strategist Keith Fitz-Gerald likes to call "unstoppable trends." In this case, the trend is scarcity and allocation.

Let's take a closer look at this unusual water stock...

Consolidate Water Co.: About the Company 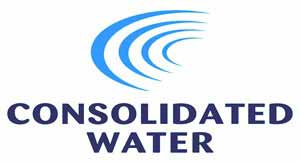 Consolidated Water was founded in 1973 as a private water utility called "Cayman Water Company" in Grand Cayman, the largest of the Cayman Islands. In 1975, it installed its first desalination unit in Grand Cayman, and secured a 20-year water production and distribution license for the island in 1979. In 1989, Consolidated Water opened its first reverse osmosis desalination plant, a technology the company has continued to develop and still uses today.

This water stock went public on the Nasdaq exchange in the United States in 1996 (the Cayman Islands are a British overseas territory). Two years later it changed its name to Consolidated Water Co. Ltd.

After the turn of the century, Consolidated Water expanded rapidly, buying seven companies over 10 years. By 2014, the company had expanded its total water production capacity to 26 million gallons per day. As of last year, Consolidated Water had 14 desalination plants operating in six countries.

Consolidated Water employs about 120 workers. Revenue for 2015 was about $59 million. 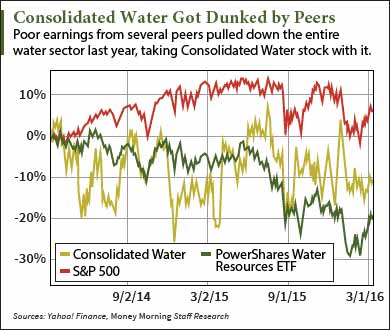 Over the past two years, this water stock has been range-bound, mostly trading between $10 and $13. CWCO stock also has underperformed the market, losing 11.80% in that time versus a 5.90% gain for the Standard & Poor's 500 Index.

On the other hand, the overall water industry, as represented by the PowerShares Water Resources ETF (NYSE Arca: PHO), is down 20.20% over the past two years. As a small and relatively obscure player, CWCO stock appears to have gotten swept up in the earnings hiccups several bigger water stocks experienced last year that pulled the entire sector down.

But the long-term prospects for water stocks have never been better. And the investment case for CWCO stock is particularly strong...

Why Consolidated Water Stock Is a Buy

Consolidated Water stock is a company with a proven solution to a problem that is bad and getting worse.

"Water is scarce for 2.7 billion people at least one month a year," Fitz-Gerald said. "Worse, more than 1 billion people don't have anything approaching reliable access to it, period. That's 18% of the world's population."

Many investors overlook "boring" water stocks because it seems obvious that water is abundant on planet Earth. But while about 71% of Earth's surface is covered by water, less than 3% is fresh, and most of that is frozen. That leaves just 0.5% as usable.

"Water is the ultimate 'must-have' investment," Fitz-Gerald said. "Governments know this, which is why worldwide water and wastewater infrastructure investment will top $25 trillion over the next 10 years, according to the World Economic Forum."

That's where Consolidated Water's desalination expertise comes in. As the need for water becomes more acute, governments will seek out the company's solutions.

Fitz-Gerald is particularly intrigued by Consolidated Water's Rosarito project in Mexico's Baja California. When completed in 2017, it will provide 100 million gallons of water a day. Parched southern California is already lining up for a share of this supply. The town of Otay, Calif., has signed a letter of intent for 20 million to 40 million gallons per day.

Fitz-Gerald believes the success of the Rosarito plant will help Consolidated Water win more business in California, which has at least eight desalination plants in planning stages now.

Meanwhile, Consolidated Water is pursuing opportunities in Asia and Indonesia, building on its successes in the Caribbean.

Fitz-Gerald is bullish on the company's prospects.

"CWCO continues to grow revenue and its balance sheet remains strong. Between the two, they've got a buffer against the kinds of things that can destroy an inexperienced competitor," he said.

Sooner or later, the world will have no choice but to ramp up its efforts to obtain more usable water. That makes CWCO stock play for patient, long-term investors.

Investors need to bear in mind that as a micro cap, Consolidated Water stock carries a bit more risk than stocks with larger valuations, and liquidity is more limited. That said, CWCO stock is trading at $11.10, right about in the middle of its 52-week range. Investors will want to exploit the volatility of the overall markets by buying Consolidated Water stock in tranches. So buy one-third now, then set up buy limit orders to purchase another third at $10.50 and the last third at $10.25.

The one-year price target on CWCO stock is $14.50, representing a 30% gain from the current price. Those willing to wait longer, however, should see much higher gains. And Consolidated Water will pay you a respectable 2.62% dividend yield while you wait.

In Case You Missed It: Our previous Pick of the Week was an oil stock that has managed to show modest gains over the past year despite the overall sector plummeting about 40%. This stock has already attracted the attention of legendary investor Warren Buffett, who started scooping up shares last year and bought more in January and February. Here's why Buffett is buying - and why you should, too...