Dow Jones Industrial Average, 3/14/2016: The banking bears were out in full force today (Monday) after chatter about global recessions and financial doom popped up across the media landscape. Morgan Stanley (NYSE: MS) projected a 30% potential for a worldwide recession, while Citigroup Inc. (NYSE: C) said the global economy is in a death spiral. Morgan Stanley slashed its global growth forecast down to 3% and said the U.S. economy will grow at an anemic 1.7%.

Why was Citigroup so bearish? Here's a direct quote from a report from its strategists:

That was uplifting, wasn't it? While you're attempting to cheer up, here's what you might have missed in the markets for Monday, March 14, 2016. 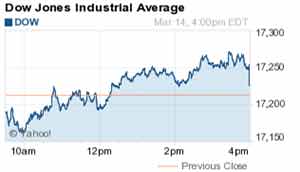 Check out the results for the Dow Jones, S&P 500, and Nasdaq:

First up, the Dow Jones Industrial Average added 15 points as consumer discretionary stocks rallied and offset a sharp downturn in oil prices. Discretionary stocks rose after a big deal in the hotel industry rocked markets, and a series of upgrades boosted key movers in the sector. Traders were mostly treading water ahead of tomorrow's Fed Open Market Committee meeting. Though the central bank is not expected to hike rates in March, CME Fed Watch projects a 50% chance of another hike in June. Wednesday's post-meeting conference will likely offer some clarity into the Fed's current sentiment on the U.S. economy and any concerns about negative-interest-rate policy in Europe, Switzerland, and Japan.

Oil prices cratered again today after Iran threw a wrench into plans for a global production freeze. The nation said it will not join OPEC's crusade to freeze output levels until it is able to push its current production levels up to 4 million barrels per day. WTI prices slipped 3.4% to $37.18 a barrel, while Brent crude prices fell 2.1% to $39.53.

Now, this is a completely different type of pot stock to consider. Shares of GW Pharmaceuticals Plc. (Nasdaq ADR: GWPH) rallied more than 130% after the company announced that experimental cannabis-based treatment has been successful in treating children with a rare form of epilepsy.

But here's the story that deserves the most attention today. According to a new report by the founder of ValueBridge Advisors and Fed Dashboard, the Dow Jones' rise over the last eight years is overwhelmingly owed to one group of people: the Federal Reserve. ValueBridge's analysis shows the Federal Reserve's loose monetary policy since 2008 is responsible for a staggering 93% of the Dow's gains. The author found that between World War II and the late-1970s, any gains were 90% tied to future GDP growth. But debt and monetary policy quickly replaced the fundamentals… and spurred a series of noticeable bubbles over recent decades.

Now, let's look at the day's biggest stock movers and an investment strategy that can gain you 190% in just a few minutes a day…