A 2016 Apple dividend increase is pretty much a lock for April. The only question is how big it will be. 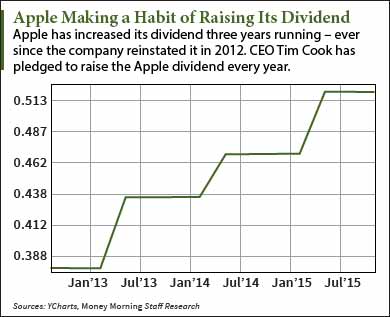 Since reinstating a dividend in 2012 (it had suspended its dividend in 1995 when the company fell on hard times), Apple Inc. (Nasdaq: AAPL) has raised it every year.

The announcement always comes in April, when the company releases its fiscal Q2 earnings.

The company can easily afford another dividend increase. As of its most recent quarter, Apple had $215.7 billion in cash and cash equivalents on its balance sheet. And it generated more than $81 billion in cash flow in 2015.

But the Apple dividend is guaranteed to keep improving.

At the company's annual shareholder meeting in February, CEO Tim Cook again made a commitment to raising the Apple dividend every year.

If the company can keep to that commitment for another 21 years, Apple will become a dividend aristocrat.

A steadily rising Apple dividend gives investors another reason to hang onto the stock, although presumptions that AAPL is now a value stock are premature.

Apple Stock: The Best of Both Worlds

Last fall's worries about slowing iPhone sales already have begun to shift. Fresh optimism is brewing over the expected introduction of the 4-inch iPhone 5SE on March 21, as well as a fully revamped iPhone 7 in September.

Beyond the iPhone, Apple is certainly working on other ways to grow its business, be it via new products like the Apple Watch, expanded media streaming services, or even the mythical Apple Car.

The point being that Apple is likely to deliver the best of both worlds - dividend income plus sales growth that will propel the Apple stock price higher.

AAPL stock took a hit of about 30% from last July to the end of January as Wall Street agonized over slowing iPhone sales growth. But since then, the Apple stock price is up 9%.

An Apple dividend increase next month, combined with fresh products due at the March 21 Apple event, will maintain that momentum.

So how much of an Apple dividend increase can investors expect? It might be higher than you think. Let's break down the numbers...

Sizing Up the 2016 Apple Dividend Increase

Before we figure out how much the 2016 Apple dividend increase will be, let's review what the company has done in the past.

Here are the stats:

That gives us an average annual Apple dividend increase of 11.2% over the past three years.

The other piece of the puzzle is the payout ratio. Right now, Apple's payout ratio is just 22.1% -- substantially lower where it has hovered for most of the past three years, around 28%.

Why We'll Get a Bigger-Than-Usual Apple Dividend Increase

Even if Tim Cook doesn't want to go that far, the odds are high that the 2016 Apple dividend increase will be the biggest since Apple brought the dividend back in 2012.

Probably the best bet is an Apple dividend increase of $0.10 per quarter. That raises the payout ratio to 26.4% and would be an increase of 19.2%.

One caveat: I'm using the trailing 12 months earnings-per-share figure, $9.40, to calculate these figures. The analyst consensus for Apple's fiscal year 2016 EPS has dropped to $9.06.

The size of the Apple dividend increase also may throw a bit of light on how confident Cook is about Apple's ability to maintain and grow its earnings going forward.

The better Cook feels about Apple's prospects, the higher the Apple dividend increase.

Another factor that could influence the size of the increase is Apple's relatively low yield compared to other veteran tech companies. For example, Microsoft Corp. (Nasdaq: MSFT) has a yield of 2.8%, and Cisco Systems Inc. (Nasdaq: CSCO) has a yield of 3.83%.

As for the Apple stock price, it figures to rise though most of 2016 as the news about the company flips from negative to positive, starting with the March 21 event.

Follow that with a big dividend hike in April, then whatever software Apple unveils at its Worldwide Developer Conference in June. After that the hype and rumors about the iPhone 7 will start to build.

The consensus one-year price target on AAPL stock is $134.13, a 33% gain from where it is now. Sounds conservative to me.

The Bottom Line: We know the Apple dividend is going up in April, but not exactly how much. Still, Apple is a creature of habit. And based on past behavior as well as the raw numbers, it's a good bet we'll see a record Apple dividend increase this year.

Apple vs. the FBI: The Apple vs. FBI case is more complicated than it looks. Apple would rather cooperate with the FBI than fight it, but says that writing code to break into this one iPhone has huge implications for all iPhones, and cybersecurity in general. Here's why this case will set a precedent that will last for decades...