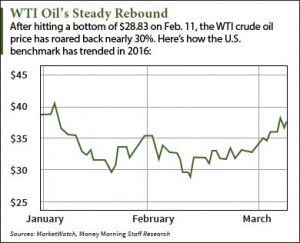 Iran is defying other OPEC leaders, and it's having a major impact on the West Texas Intermediate (WTI) crude oil price today (Monday).

The WTI crude oil price fell for the second straight session today after Iranian officials said they wouldn't join the cartel's effort to freeze production and stabilize prices. At 1:10 p.m., the U.S. benchmark was down 3.7% and trading at $37.08 a barrel. Despite today's drop, futures for April delivery are still up 9.9% this month.

And Money Morning Global Energy Strategist Dr. Kent Moors – a 40-year oil industry veteran who's advised the highest levels of U.S. and Russian energy agencies – says there are two consequences of this low oil-price environment that will offer a number of long-term profit opportunities.

But first, here's why Iran is deflating oil prices… again.

The fall in the WTI crude oil price today came after Iran's oil minister said it wouldn't freeze its output until it reached a daily production target of 4 million barrels.

Since the new year, the country has repeatedly ignored pleas from OPEC members like Saudi Arabia, Qatar, and Venezuela to keep output steady in order to boost prices. Iran has already ramped up production by exporting 1.75 million barrels per day from Jan. 21 to Feb. 19 – the Iranian month of Bahman.

Investors worry Iran's threat to pump at a record pace would erase the WTI crude oil price's gains this month. After all, the latest OPEC data shows Iran sits on 157.5 billion barrels of oil reserves. That's the third-largest amount of crude reserves of any OPEC member.

But Iran's race to become a global export player again is largely overstated. In fact, the International Energy Agency (IEA) says the country has several obstacles to overcome before it starts exporting at pre-sanctions levels.

"Iran's return to the market has been less dramatic than the Iranians said it would be," the IEA said in its March 11 report. "Progress in ramping up crude sales has been somewhat slowed by the wariness of banks and ship owners to do business with Iran."

Day-to-day news like Iran's reluctance to freeze output will keep the WTI crude oil price low in the short term. That means a number of U.S. oil companies will drown in debt as they keep drilling in this unprofitable environment.

But Moors says this isn't a bad thing for investors. In fact, there are two consequences of this turmoil that will open up nice investment opportunities for energy investors…

The first consequence is the most obvious one – these debt-laden firms will go bankrupt and be acquired by larger companies.

You see, the debt these companies carry doesn't affect the value of their assets. These properties, which include everything from land leases to already produced volume, will attract buyers and form a submarket of mergers and acquisitions.

"Surviving companies will be able to acquire very desirable assets (and the revenue that goes with them) at a discount," Moors said today. "For you, that will mean some real opportunities to invest in companies that will rapidly expand their market share."

That leads us to our second consequence. The fewer companies there are, the less production there is. This lack of what Moors calls "desperation production" will ultimately lower overall supply and boost oil prices over the long term.

The concept of demand outpacing supply is already being embraced by the U.S. Energy Information Administration (EIA). In fact, the agency said annual global consumption will hit 96.5 million barrels a day next year. That's up 2.9% from 93.8 million in 2015.

Both of these consequences of the high debt, low price climate will not only increase oil prices, but also boost some oil stocks in 2016.

Stay tuned to Money Morning for more of Moors' energy recommendations by following us on Facebook and Twitter.

Three Energy "Shifts" to Emerge from the Windsor Dungeons: Conversations at the annual Windsor energy consultations are always very frank. This year they led to agreement on the three most important changes currently reshaping the sector. And these three matters are about to open up some real doors to energy investment profits…

ITS NOT WRITTEN IN STONE .I don't think the article really takes into account American politics, would they really be that keen to go back to pre Shale days and allow their own oil and gas production to wither away, and seek, instead, to buy from the Middle East . I don't think that the American public would agree to that for one minute, and why should they. As has happened today, in the UK, the Americans will undoubtedly offer tax breaks to home producers of oil and gas